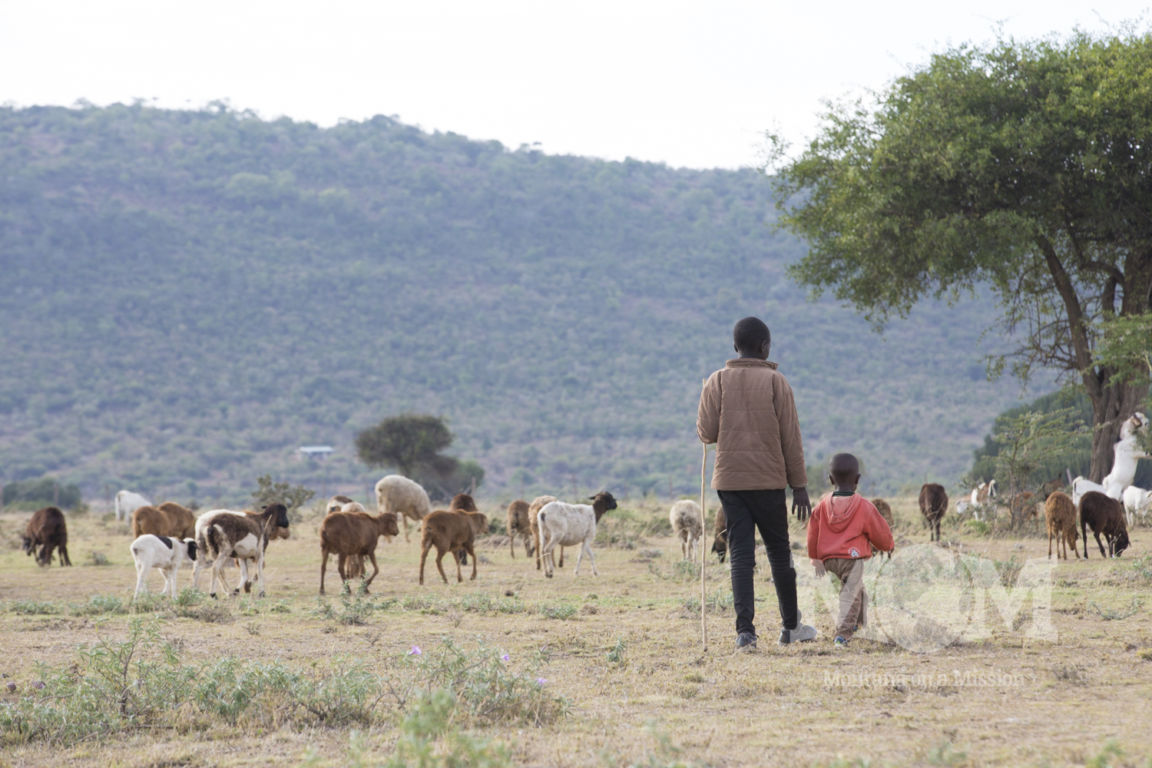 As soon as a boy is old enough to follow along after his brothers and cousins and be away from his mother for the day, he begins to learn the art and science of “looking after” or shepherding livestock. Like toddlers anywhere in the world, little Maasai boys and girls are very keen to begin ‘helping’ mom and dad and taking part in what the older kids and grown-ups do. For the boys that means looking after the cattle, sheep and goats – taking them to water and grazing for the day. 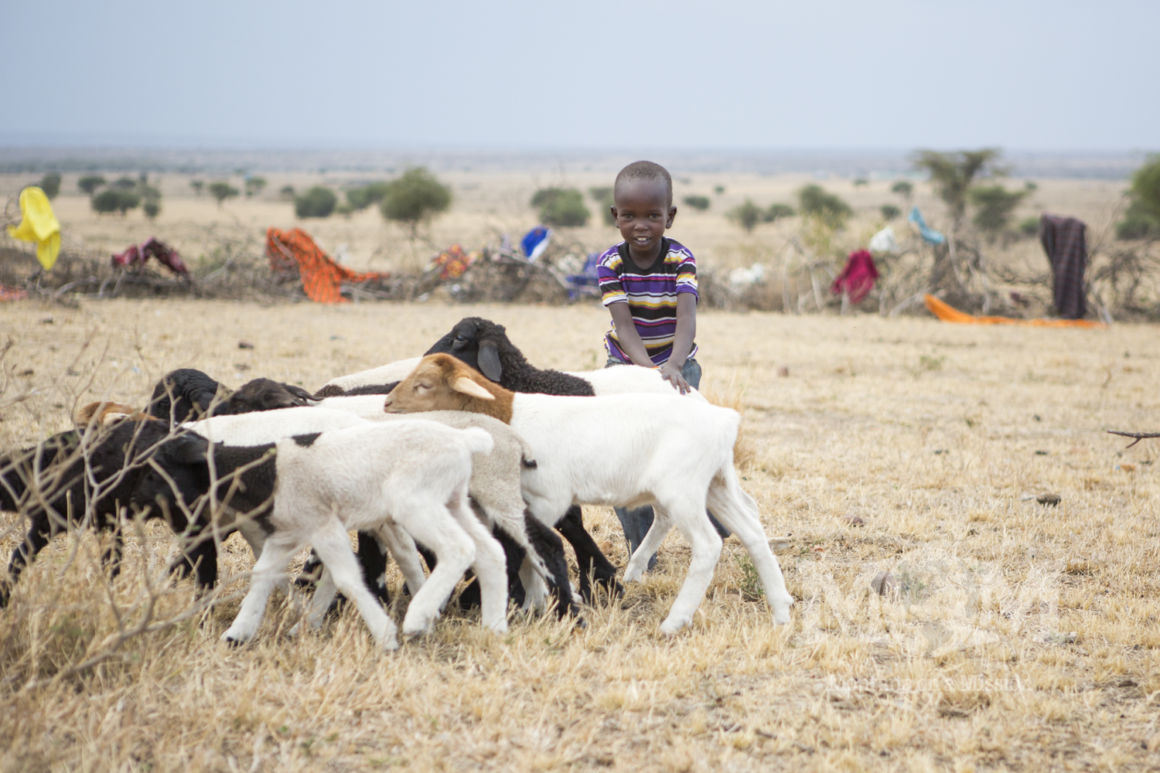 A young boy helps to herd the lambs into his manyatta. 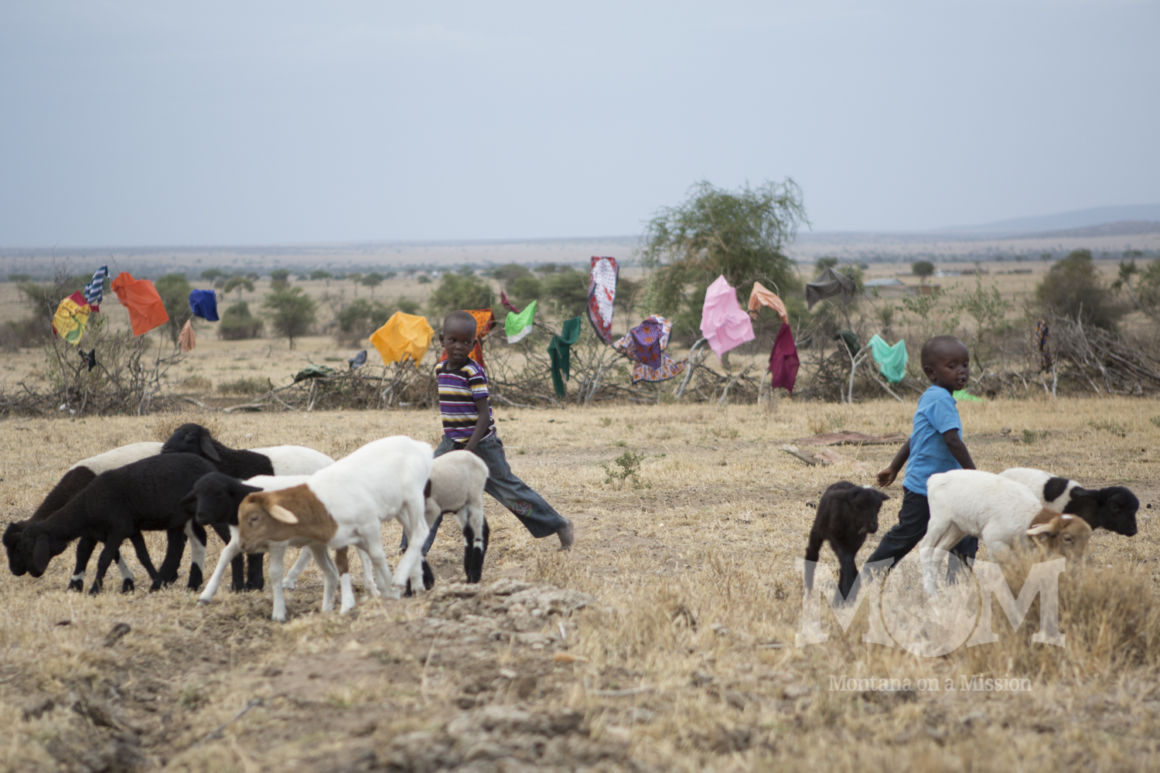 Young boys are eager to help the big boys. They practice their skills by herding the lambs and kids into the pen within their manyatta.

They will keep an eye out for predators and make sure the herd stays together. Typically, the boys go in pairs or groups of three and work together to care for the family’s greatest asset. The Maasai are historically nomadic pastoralists. Raising livestock for their families’ primary protein source and selling or trading some of the offspring in order to obtain other things they need. The Maasai people hold their wealth in cattle.  The cattle are seen as a savings account and are rarely used for food. Beef is typically only eaten at important ceremonies and events such as weddings or funerals. A cow may be sold for larger purchases and bills such as school fees or a hospital bill. Goats and sheep are raised for meat and sold to cover everyday expenses such as groceries, charcoal or home goods. 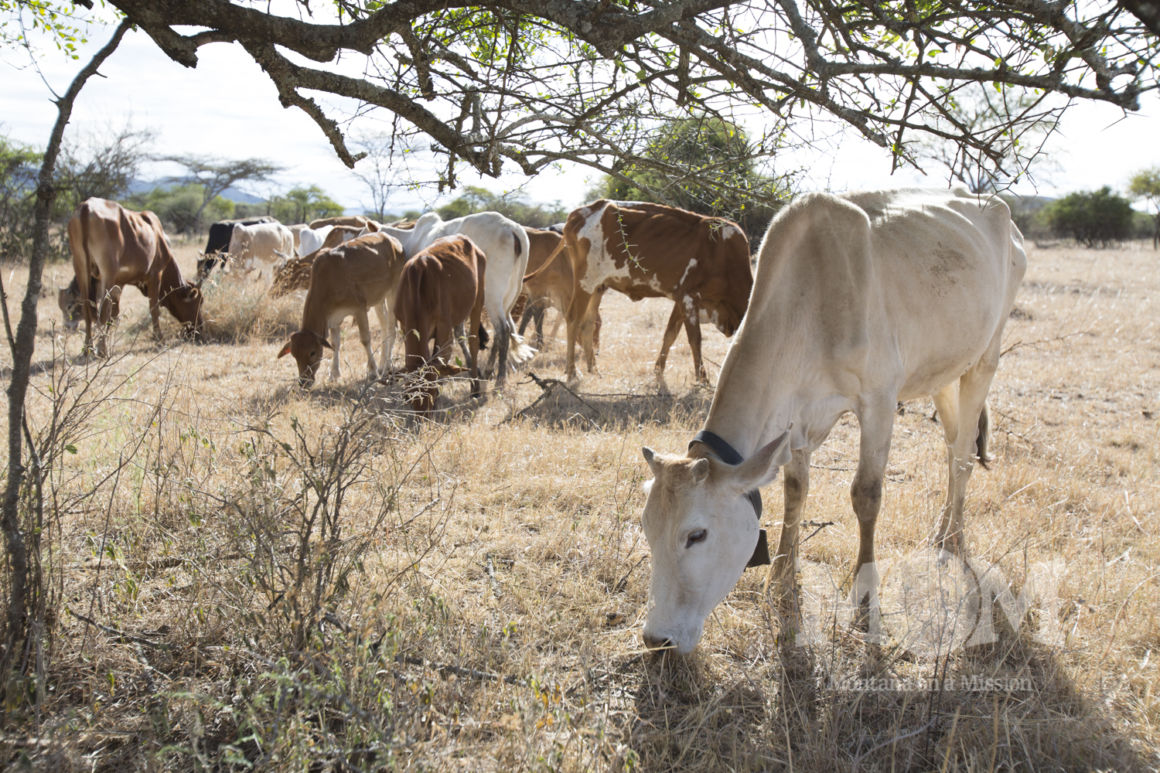 Cattle must be very hardy to survive the prolonged dry seasons near the Maasai Mara area of southern Kenya. 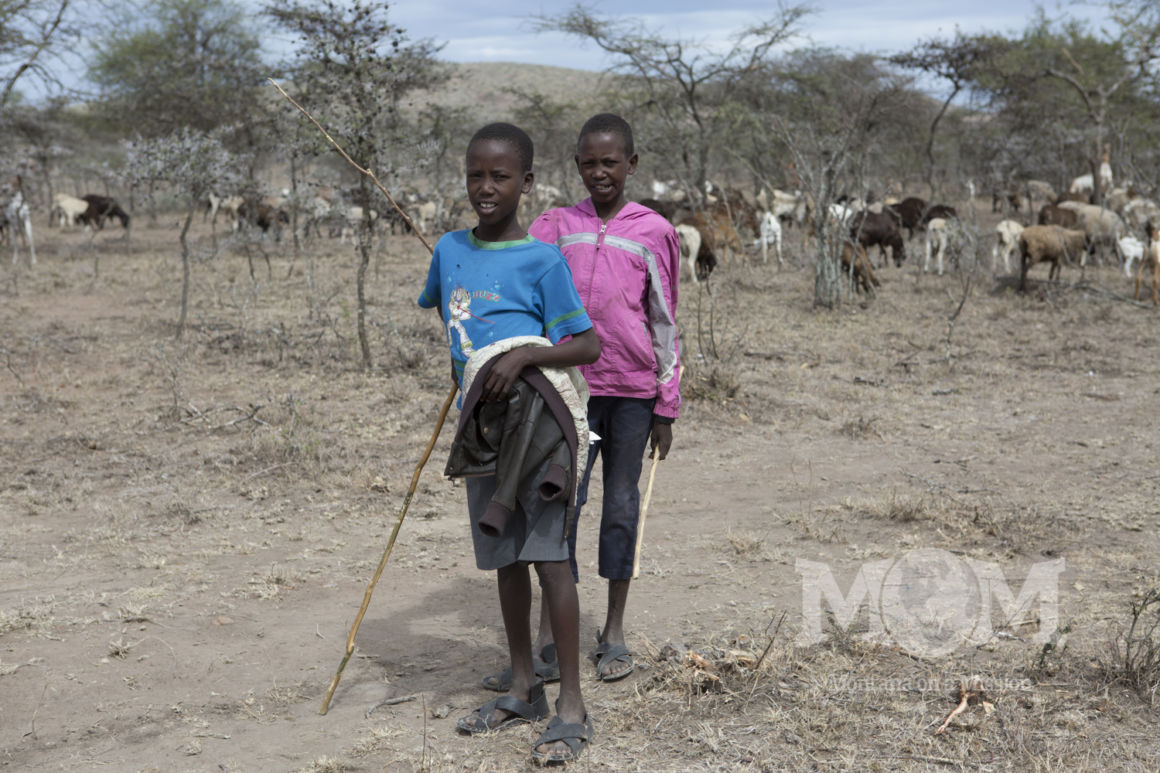 Young boys spend their days looking after a herd of goats and sheep in a dry area of southern Kenya.

Each morning after the animals are milked and the very young animals are caught and corralled, the rest of the herd is taken to water. The young boys follow the animals along chattering, whooping and brandishing sticks to keep the animals together and going in the right direction. Generally, the animals know where they are going but as the dry season progresses and vegetation starts to disappear the boys must take the herd further into the bush to find grass. The further they venture from home the greater the chances of encountering dangerous wildlife. The Mara area is home to many dangerous animals; lions, leopards, cheetahs, Cape buffalo, elephants, hippos, hyenas and rhinos. 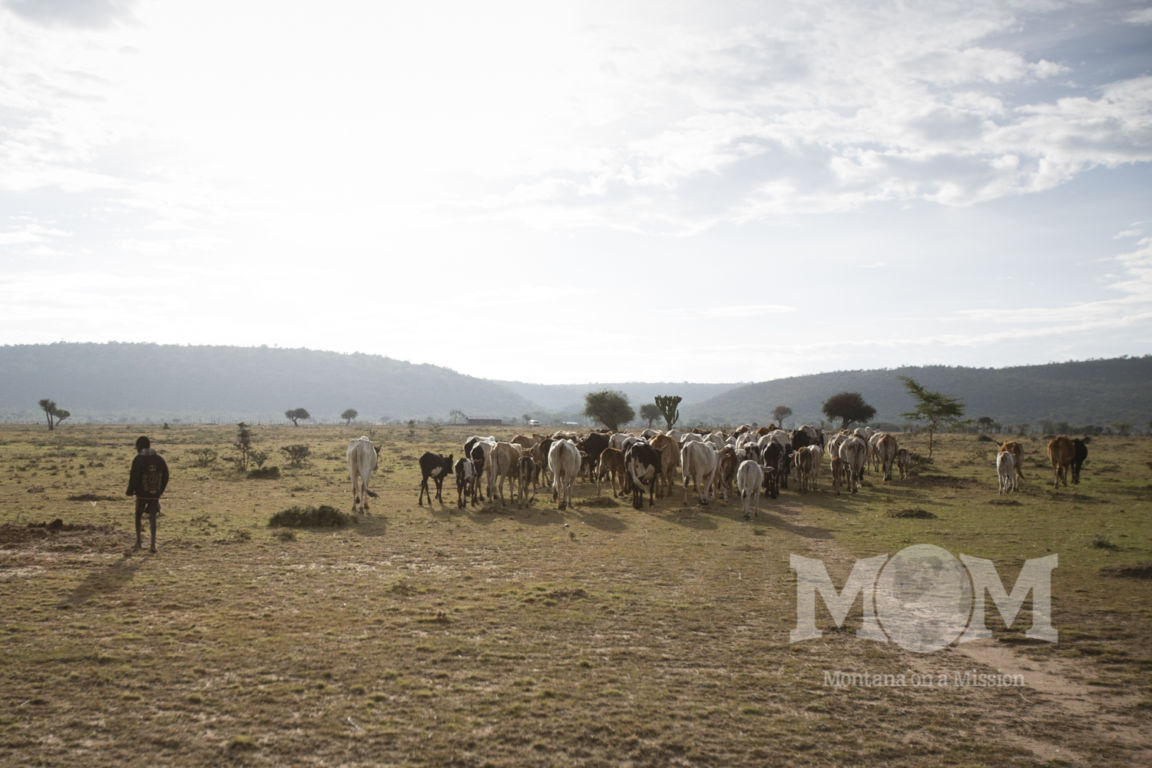 A shepherd boy at the start of a long day. He will be gone with the cattle until dusk. 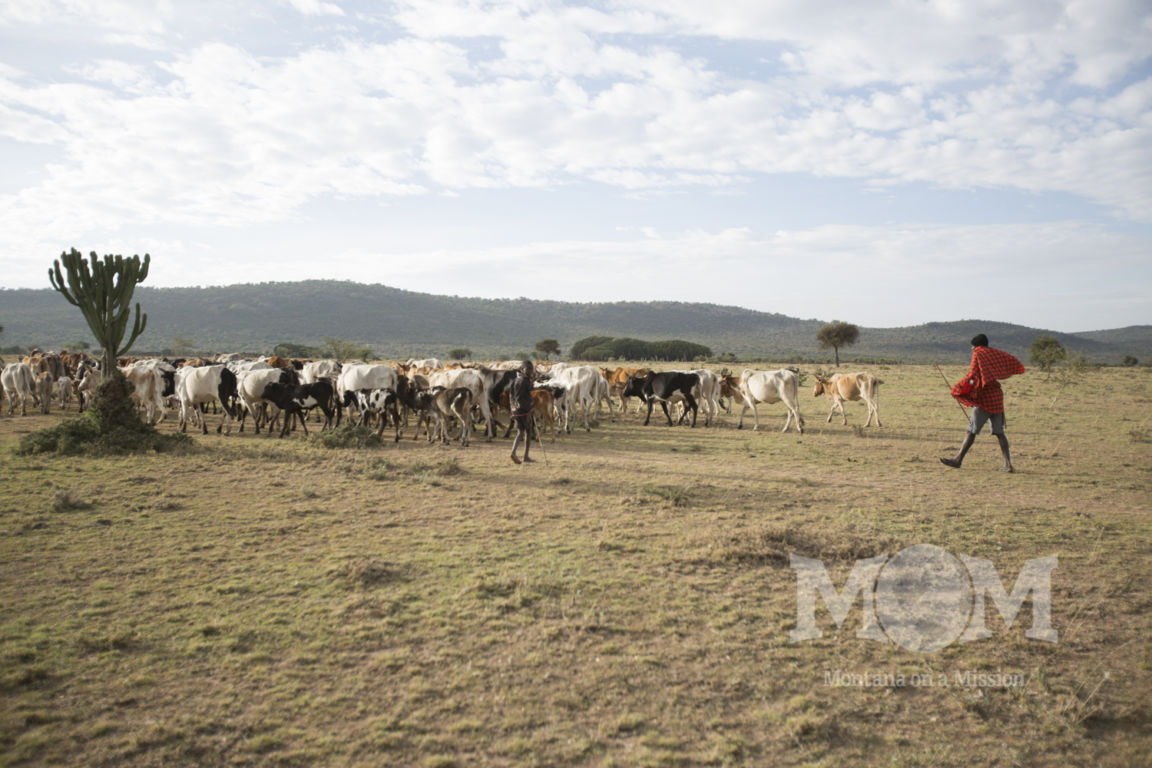 Very early each morning the boys take the cattle out into the bush in search of grass and water. 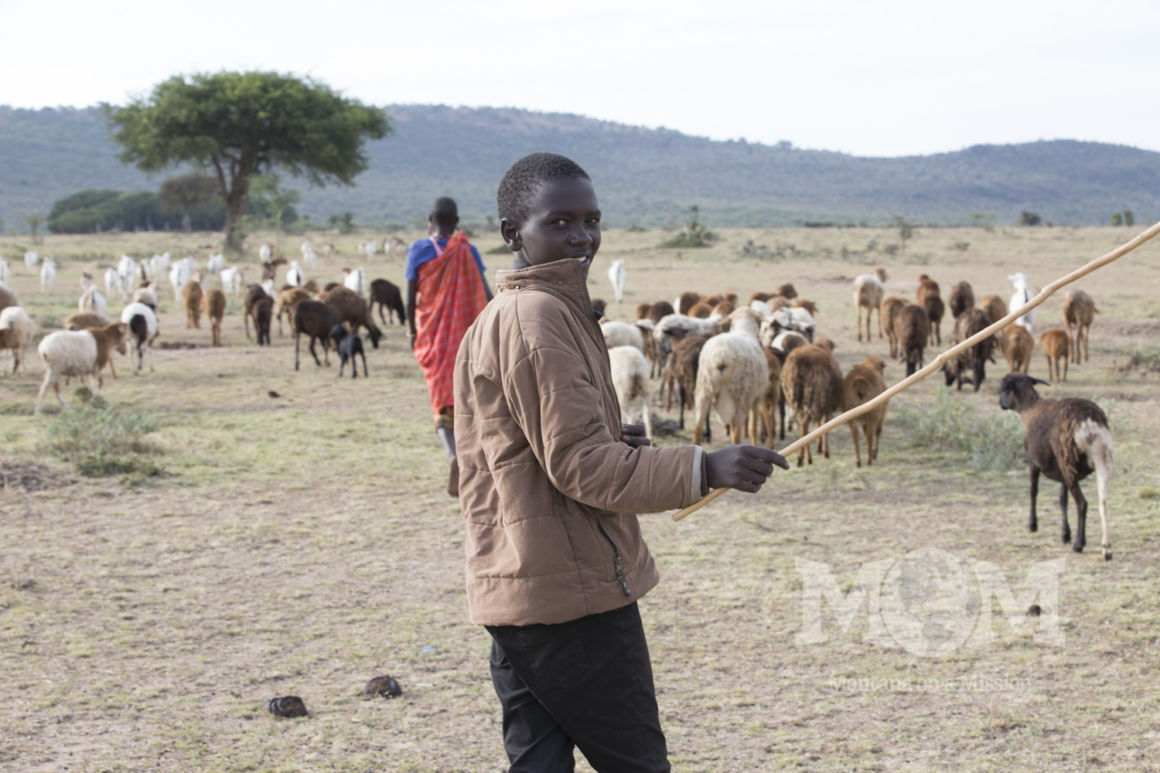 Kelvin has been looking after the livestock since he was a young boy. 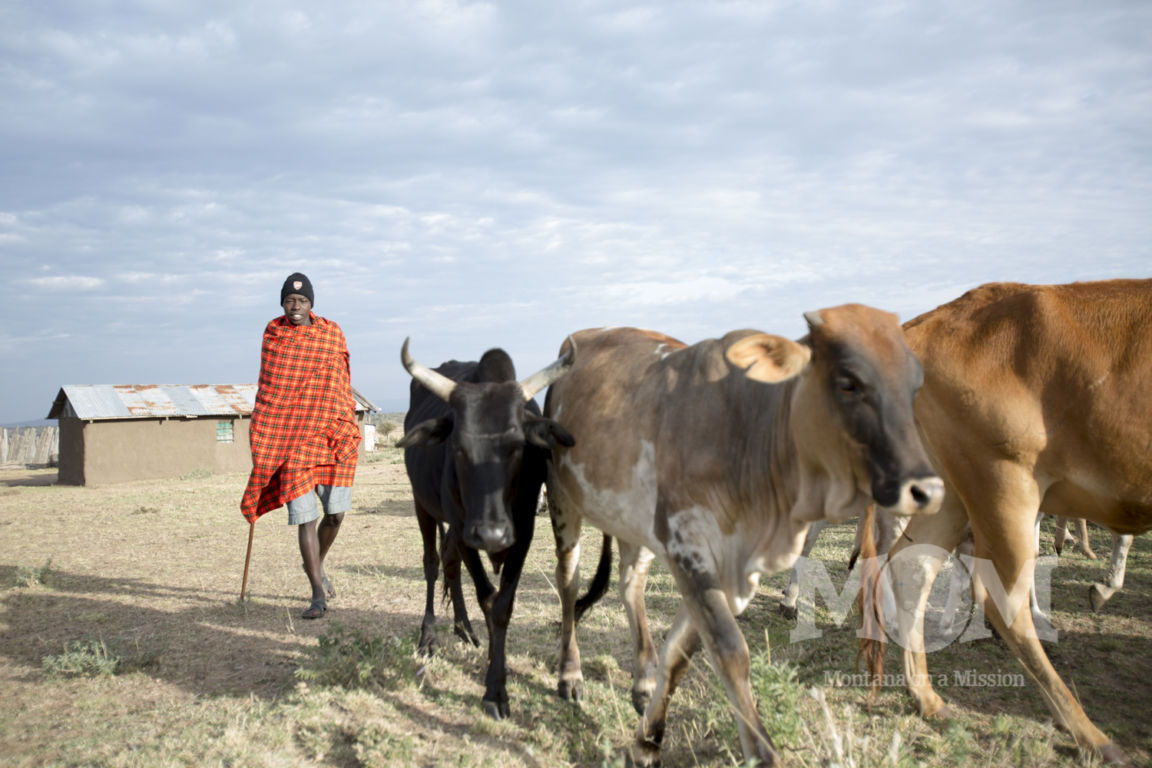 Kelvin’s cousin, William, heads out to the bush for the day with a herd of cattle.

Kelvin will never forget a particularly terrifying day when he was 12:

“In one afternoon as we were looking after the cattle at the forest the buffaloes came out and found us. We were shocked to find ourselves with the buffaloes. We lie ourselves on the ground as the best method of escape the buffaloes. I remove out my sword but I was overloaded with fear which rise in me.

The buffaloes were known in our area as dangerous animals because several deaths of people they were known as the ones who were causing. We were as confused as rats in a boxing arena. We were lacking what to do with the matter but we knew, “never give up”. Suddenly my uncle arrived with the game warden. We feel free! They chased them and we got out of that forest. Hey, buffaloes are dangerous animals!!!

That is the day I will never forget in my life!” 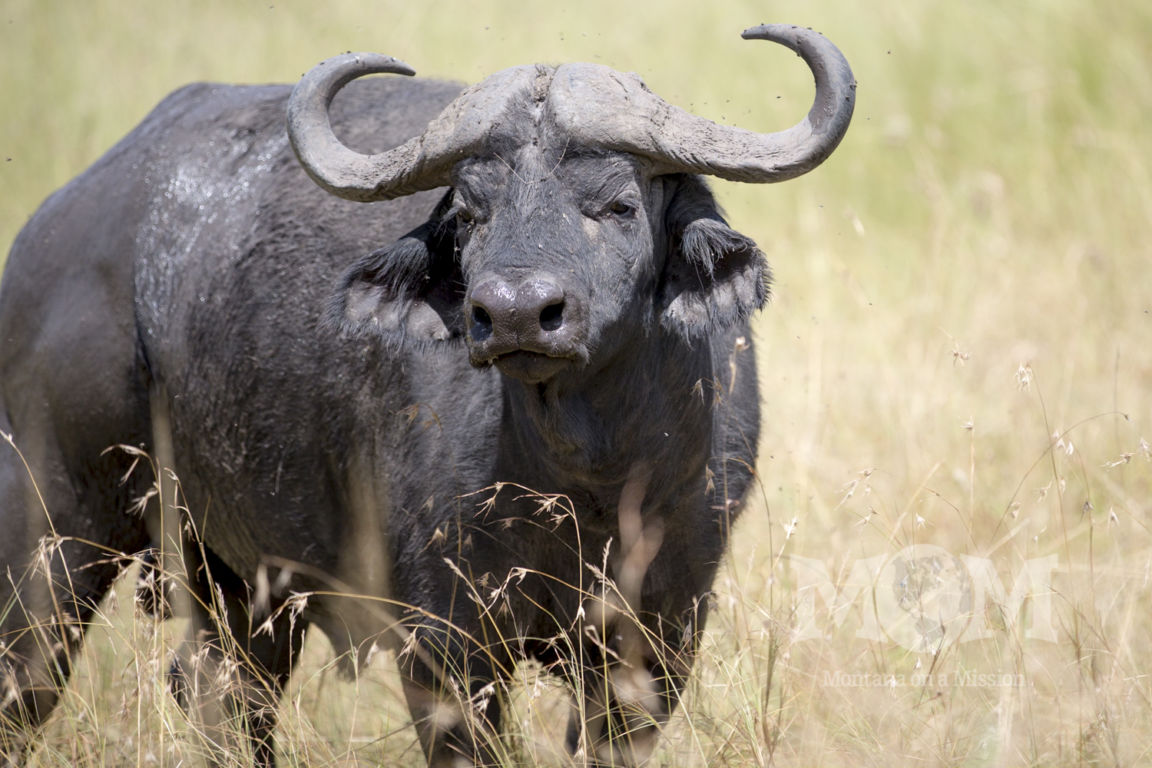 The Cape buffalo is one of the deadliest and most aggressive wild animals in Kenya. 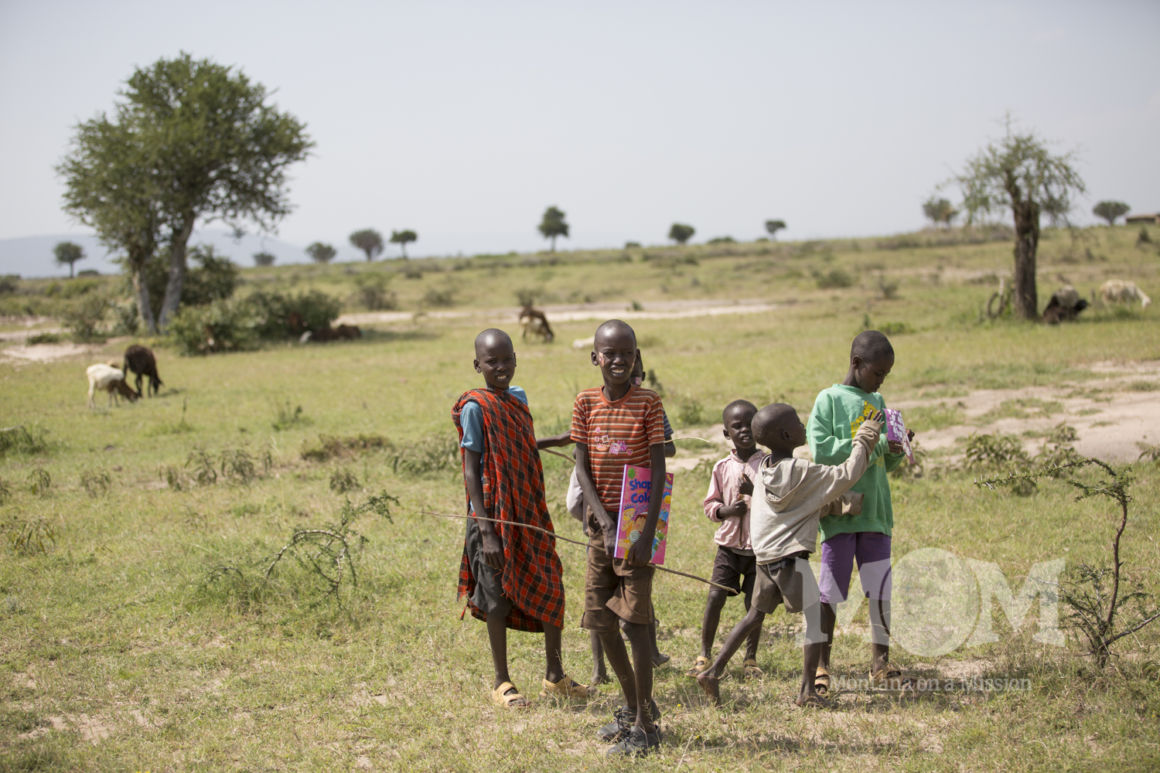 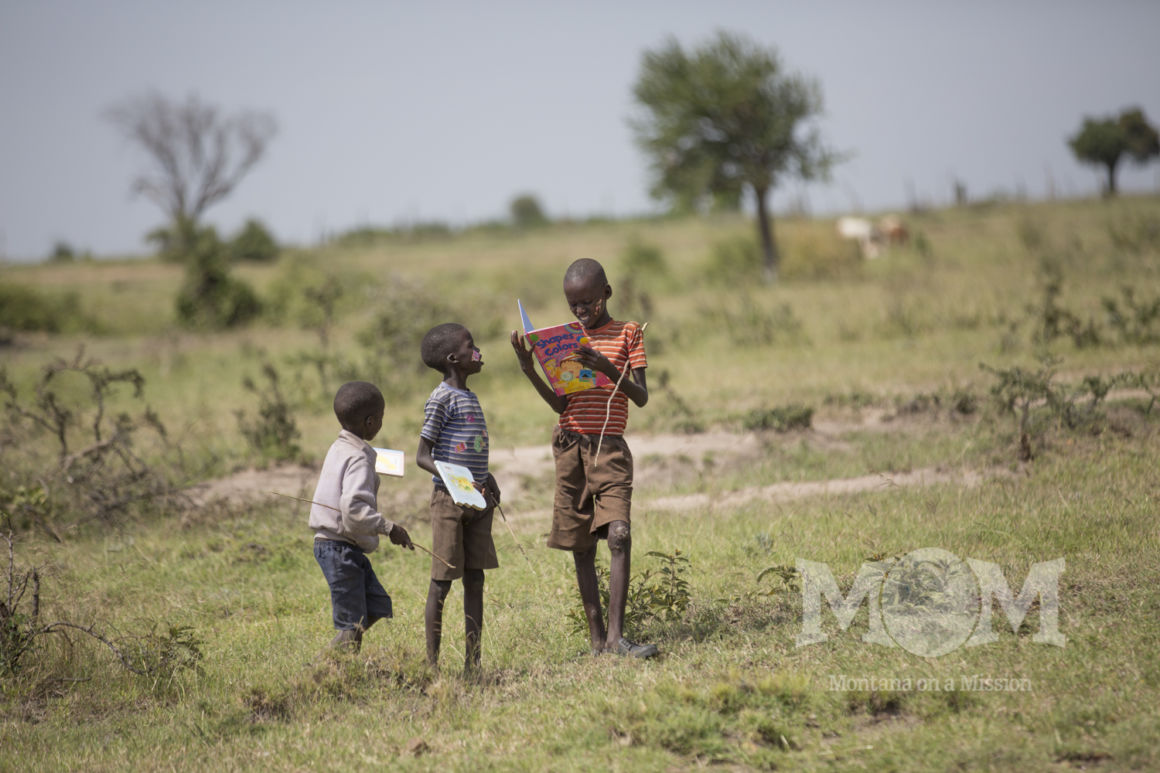 Maasai shepherd boys enjoying books we brought from home to give them. 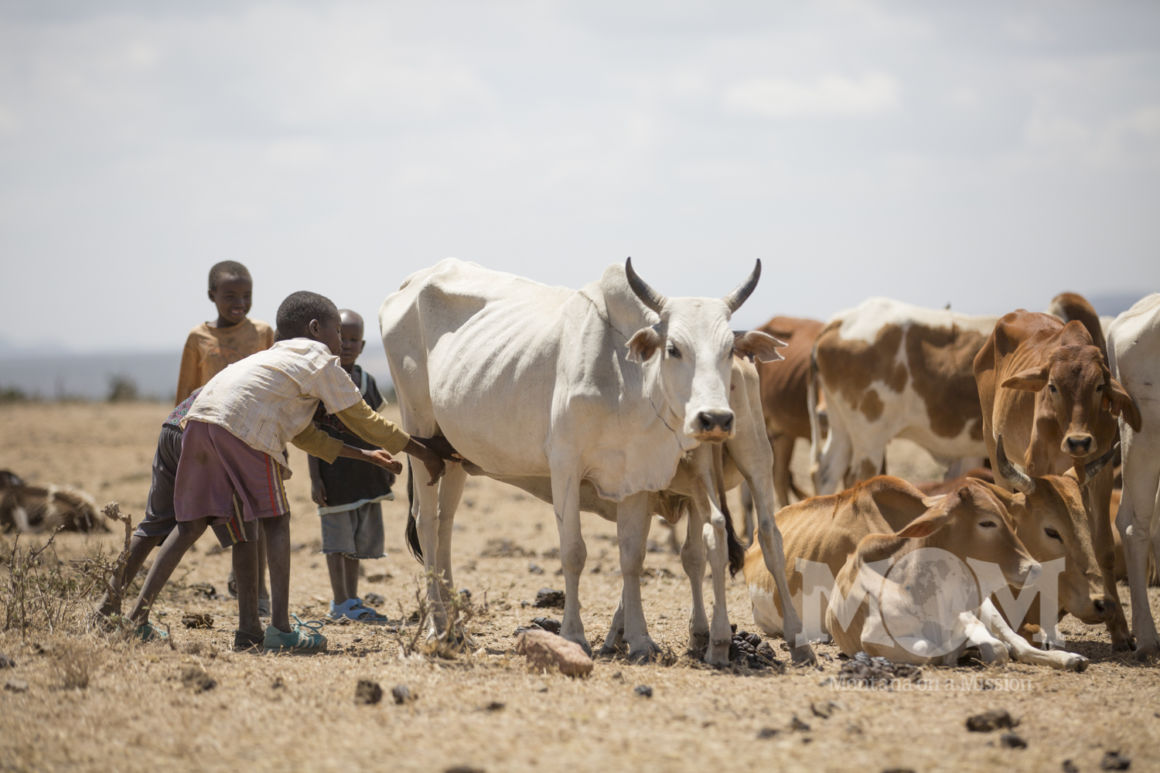 Shepherd boys steal milk from one of the cows they are looking after to quench their thirst. 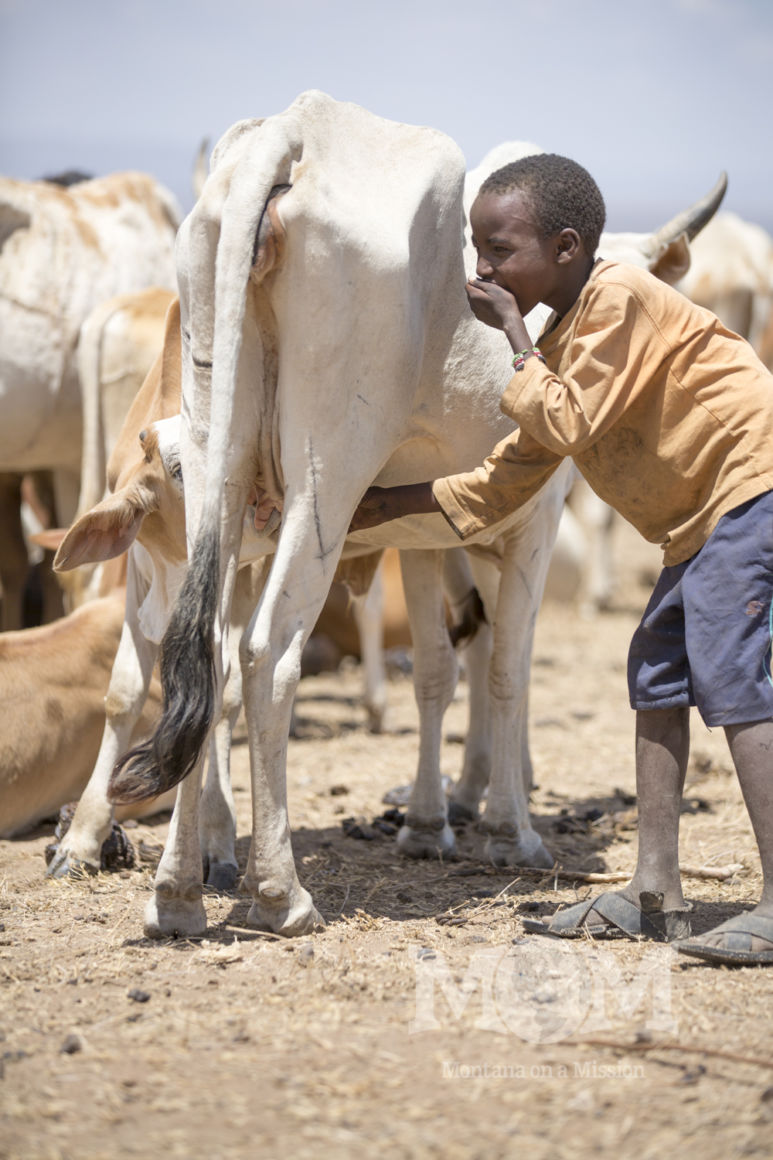 Shepherd boys sometimes quench their thirst with a few squirts of milk from one of the cows they are looking after. In drier times they tell stories of having to drink the cow’s urine.

Kelvin began looking after the livestock with his cousins when he was very young. Now in class seven (equivalent to our 7th grade in the U.S.) he looks after the animals when he is home from school on breaks.  The Kenyan school system is year-round and school is in session for 9-10 weeks with 2-3 week breaks at the end of each term. Kelvin’s parents work very hard to be able to send their children to school and place a high priority on education. Many children are not so lucky. Either their parents don’t value education or they are unable to afford it. Even public school fees are out of the realm of possibility for many families; tuition, uniforms and books costing about $70 per semester.

We are currently working with Kelvin’s family and his neighbors to develop a spring and pipe clean water to his community.  This will include multiple taps and livestock troughs along the 2 miles of pipeline.  If you would like to partner with us on this project and others like it you can make a contribution here. 100% of donations go directly to the project! 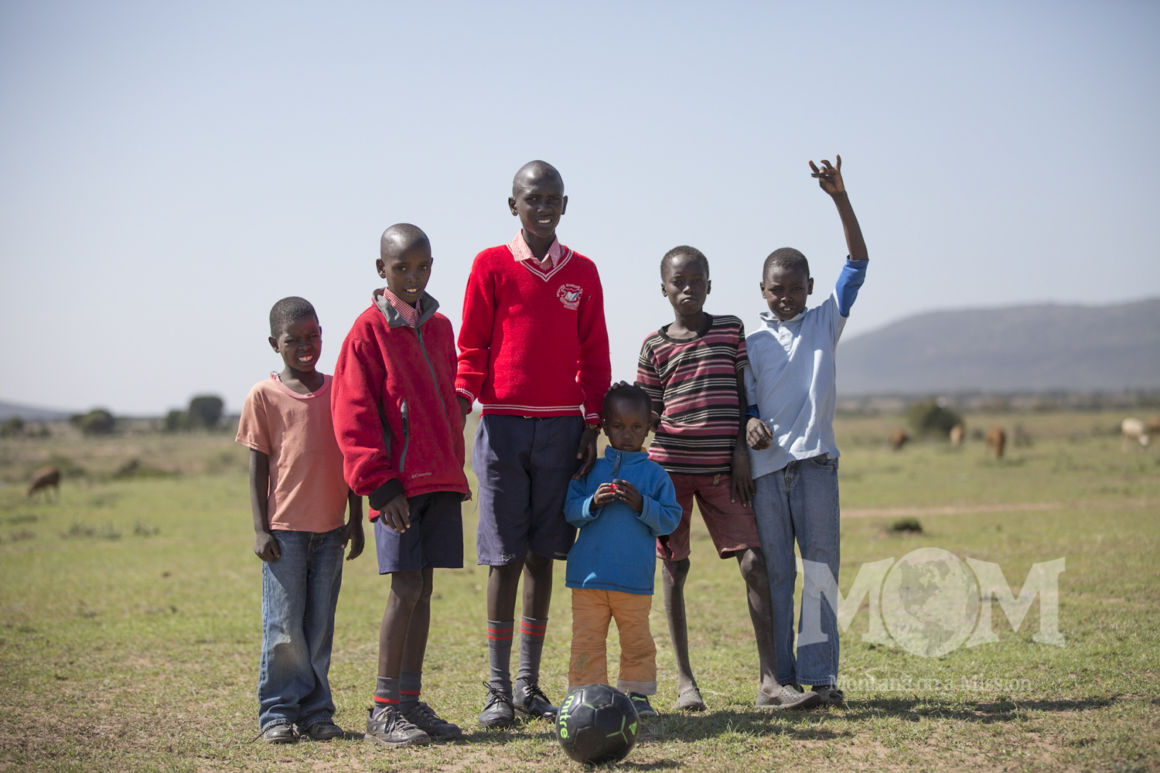 Kelvin in his school uniform with his brothers and cousins.

Walking for Water
Scroll to top