A morning in the life of Noomali 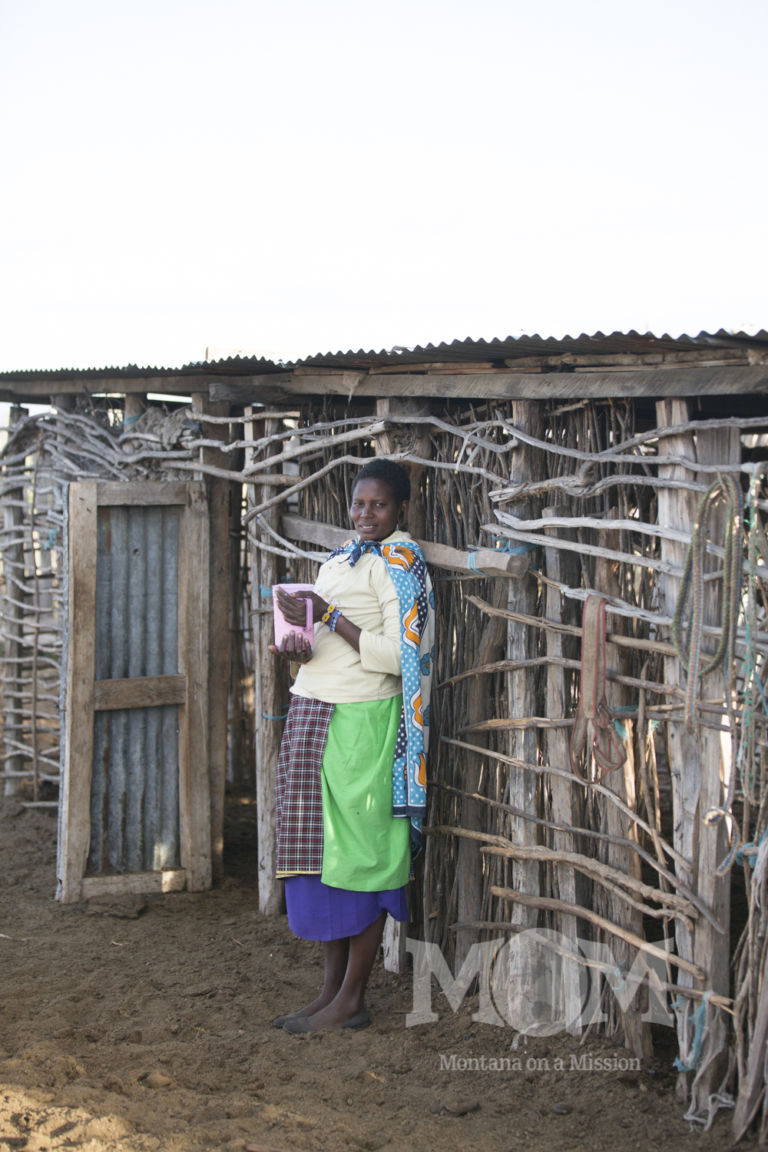 She wakes like all the mamas before the sun even begins to shed light in the new morning.  Noomali quietly lights a fire in the kitchen area of her family’s home. There is a just enough water left in the yellow plastic jerry can she filled yesterday at the spring. She pours it carefully into the blackened steel pan and leaves it to boil over the fire. Noomali wraps herself in her shuka, (a colorful cotton wrap) and covers her head against the relative chill of the early morning air. She walks the well-beaten path to the circular pens which protect the family’s livestock. 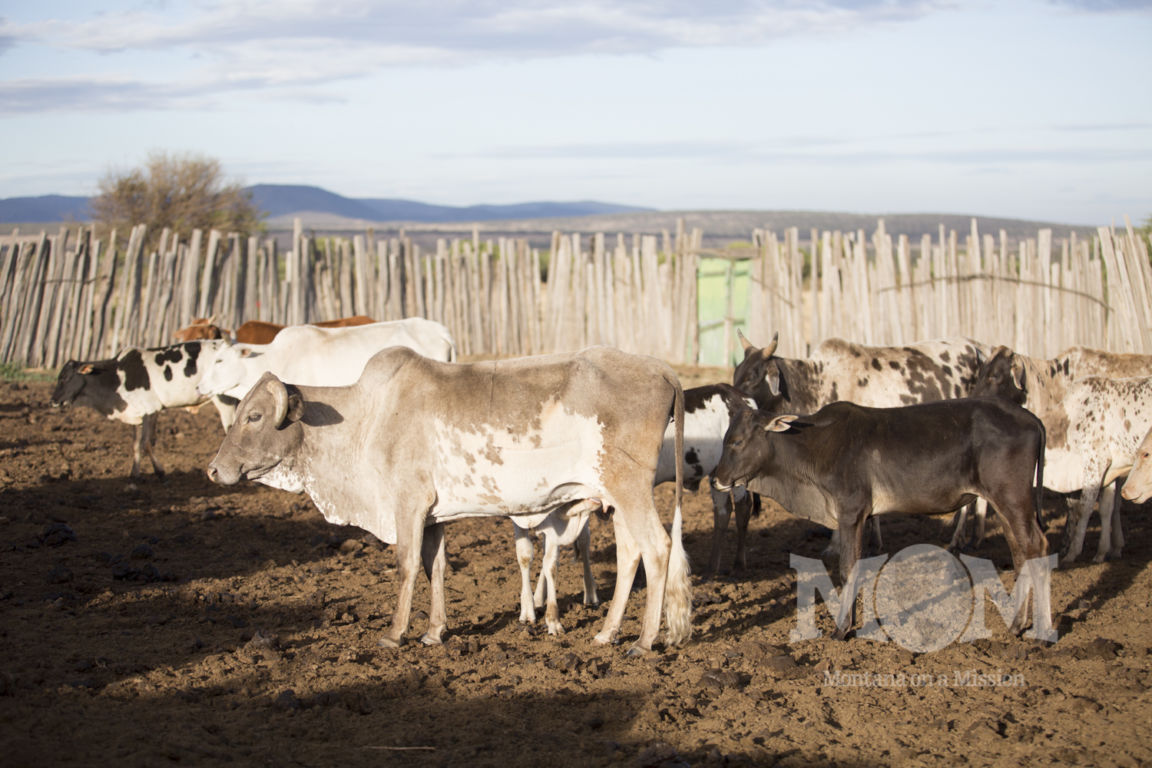 Cattle stand in the early morning light within the pen that keeps them safe from predators during the night.

The cows, sheep and goats are ready to be milked and led to water. She lifts the repurposed metal sheet from the gate that helps to keep out the night predators; lions and hyenas. I can see she has done this thing maybe a million times before – virtually every morning since she was able to toddle after her own mother and help to hold the kettle. Noomali quietly approaches a cow with a young calf who is sure to have milk to give. This cow and her herdmates not only support their own calves but also the Lukkeine family, the local Kenyan Wildlife Service rangers and other neighbors. Noomali is able to sell the surplus milk to help pay the children’s school fees. 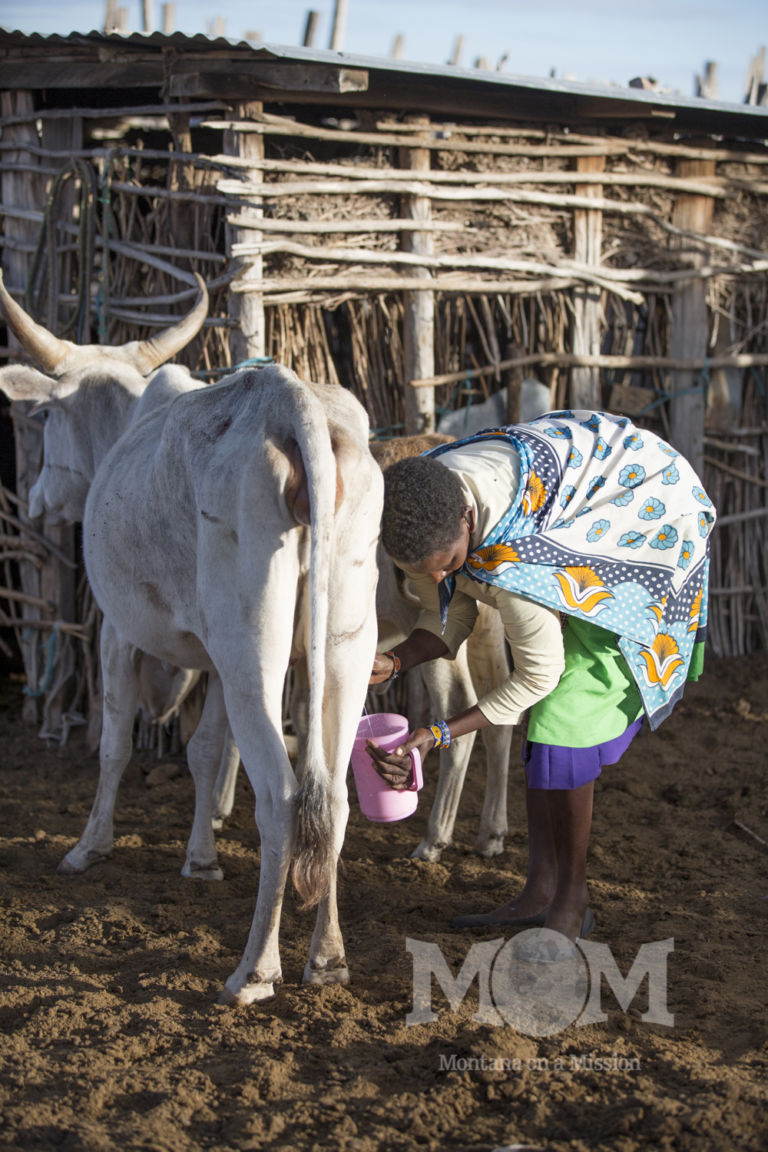 Noomali milks a cow first thing in the morning. 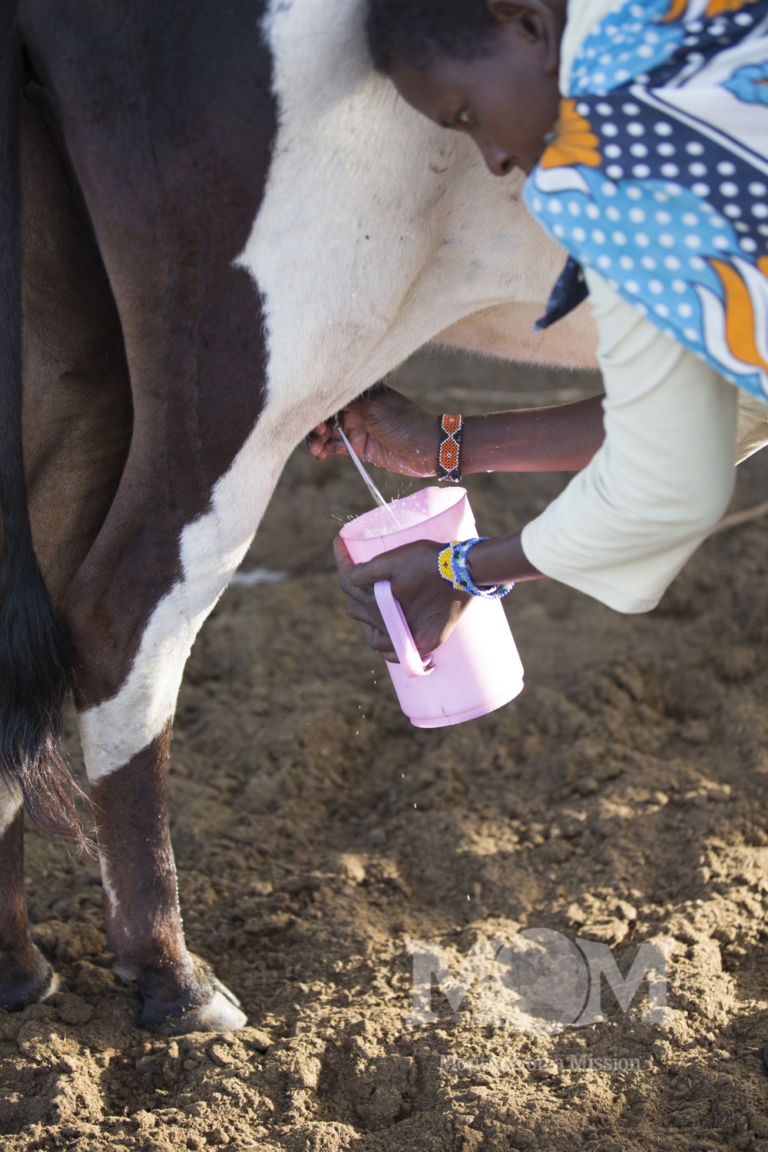 Cows with young calves typically have the most milk.

She moves from animal to animal being careful to leave each bovine mother with enough milk for her own calf. When the cows have been milked she enters the next pen and joins her daughters, Miriam and Nasheepai who have already begun to milk the sheep and goats. 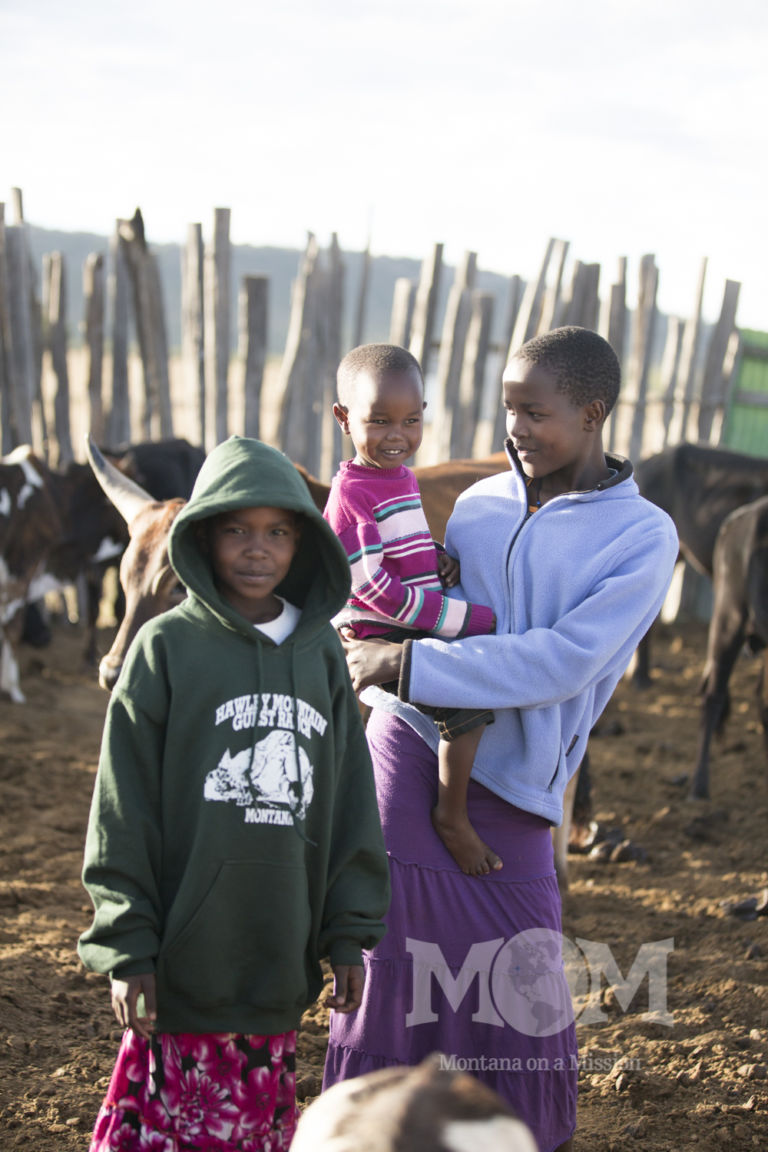 The children are up early to help with the milking. 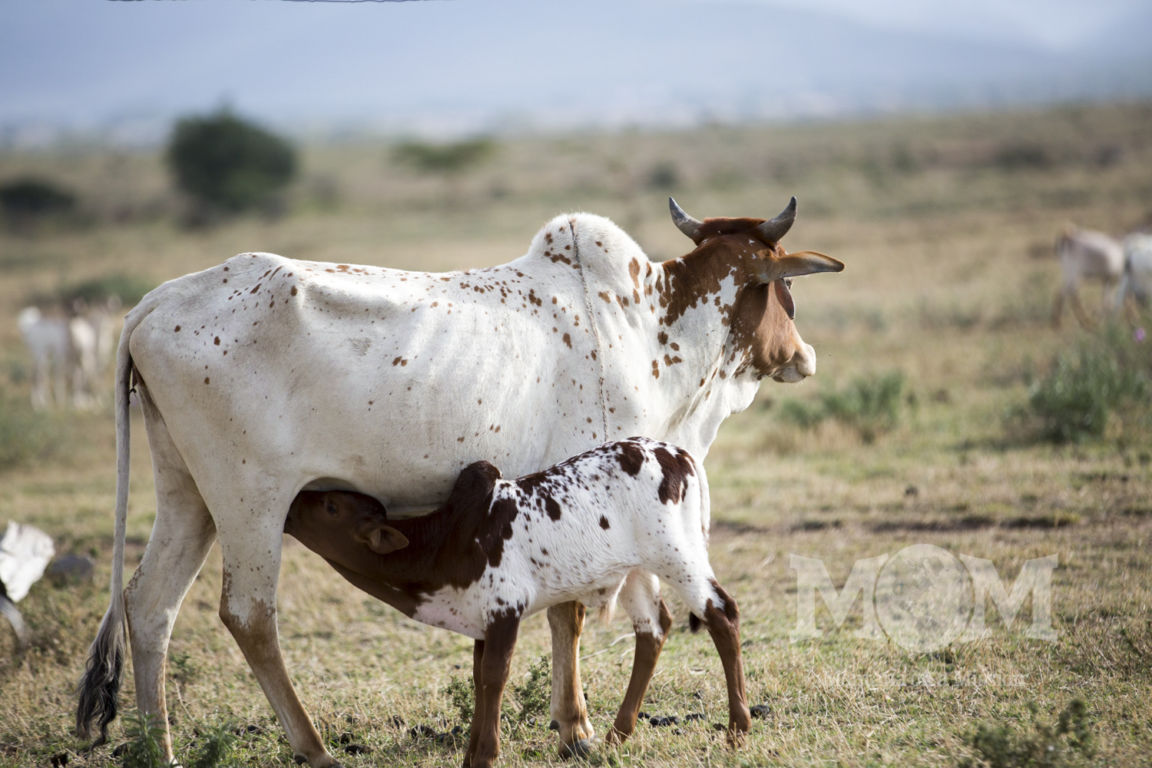 A young calf helps himself to breakfast before his mother leaves for the day in search of grass.

Meanwhile, Kelvin, the oldest son of David and Noomali tends the boiling water and stirs in the tea leaves, milk and sugar for the family breakfast of Kenyan mixed tea. 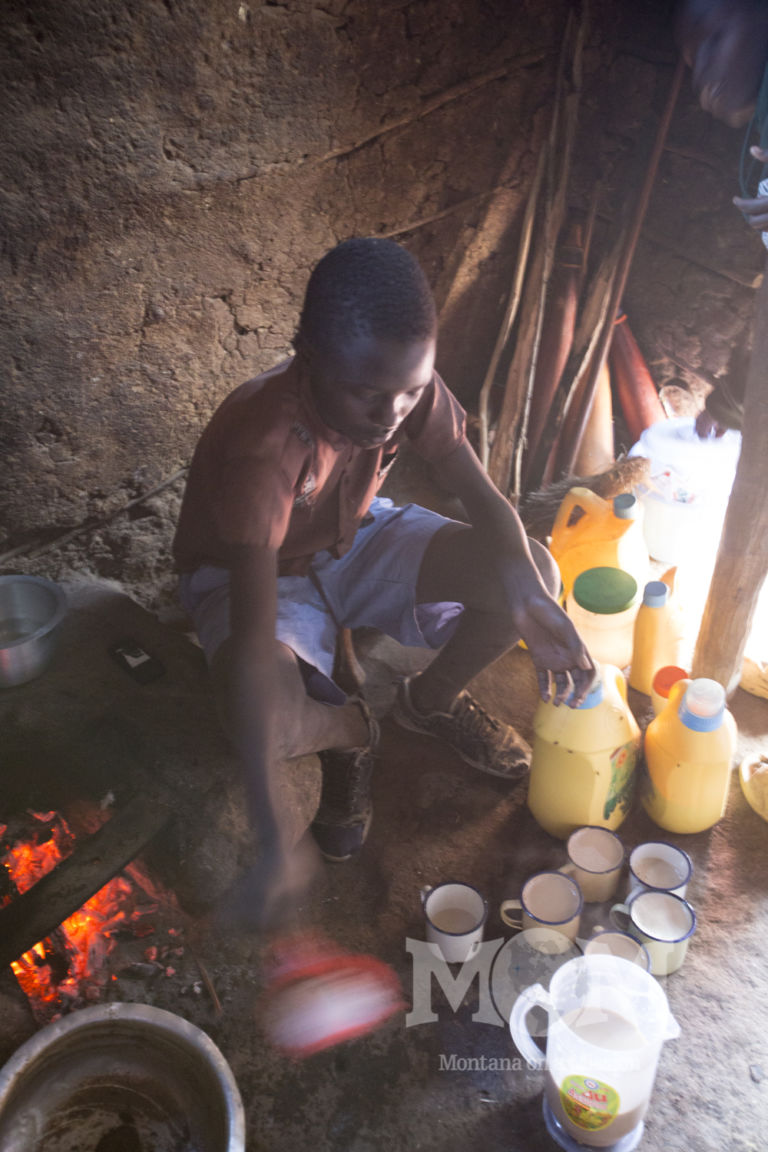 He pours the milky tea into tin cups. 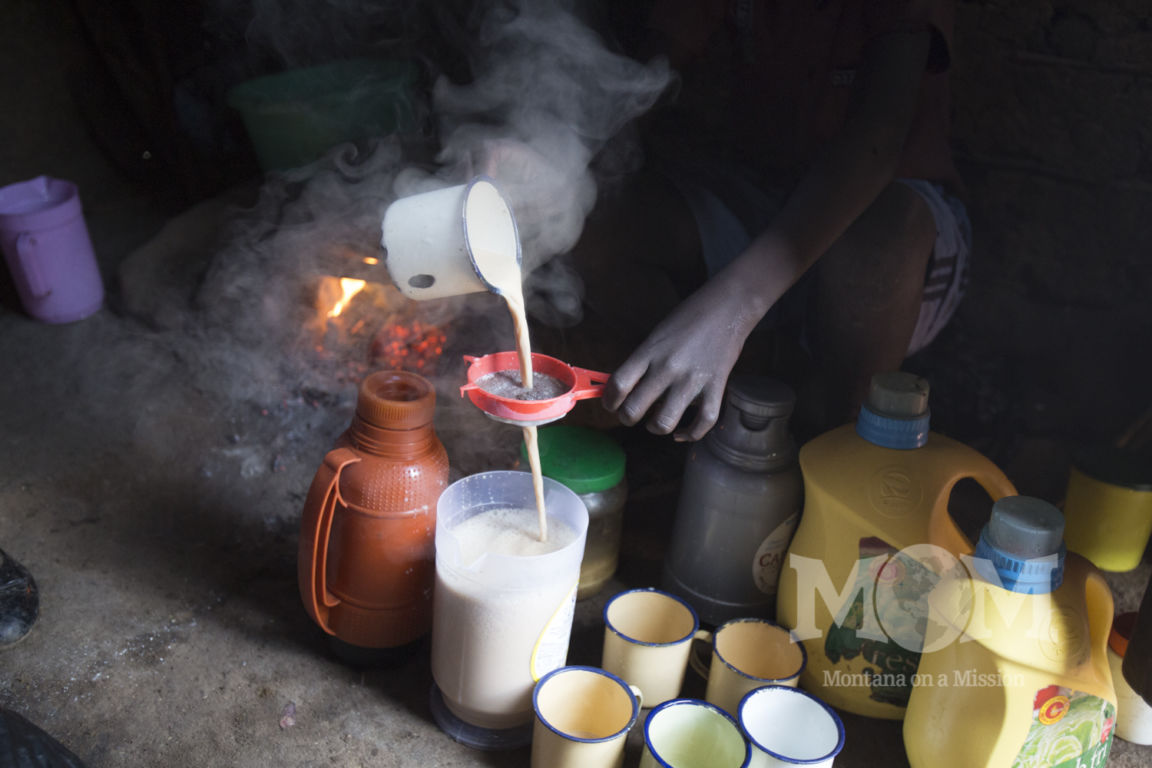 Kelvin pours the steamy tea through a sieve to remove the tea leaves.

He has no shame in tending to this job that is traditionally performed by women.  His father has taught him to help and support his parents and the family in whatever way he can. David, learned to cook for himself at his previous job at a safari camp.  It was a very good job but kept him away from his family for many months of each year. Kelvin strains the milky tea into tin cups for everyone. Nasheepai helps her little brother Leonard, who is three, wash his hands and face.  She cools his cup of tea for him by pouring it back and forth between two cups. Leonard eagerly waits for his breakfast, licking his lips. They gather in the mud kitchen and drink the steaming, sweet tea. 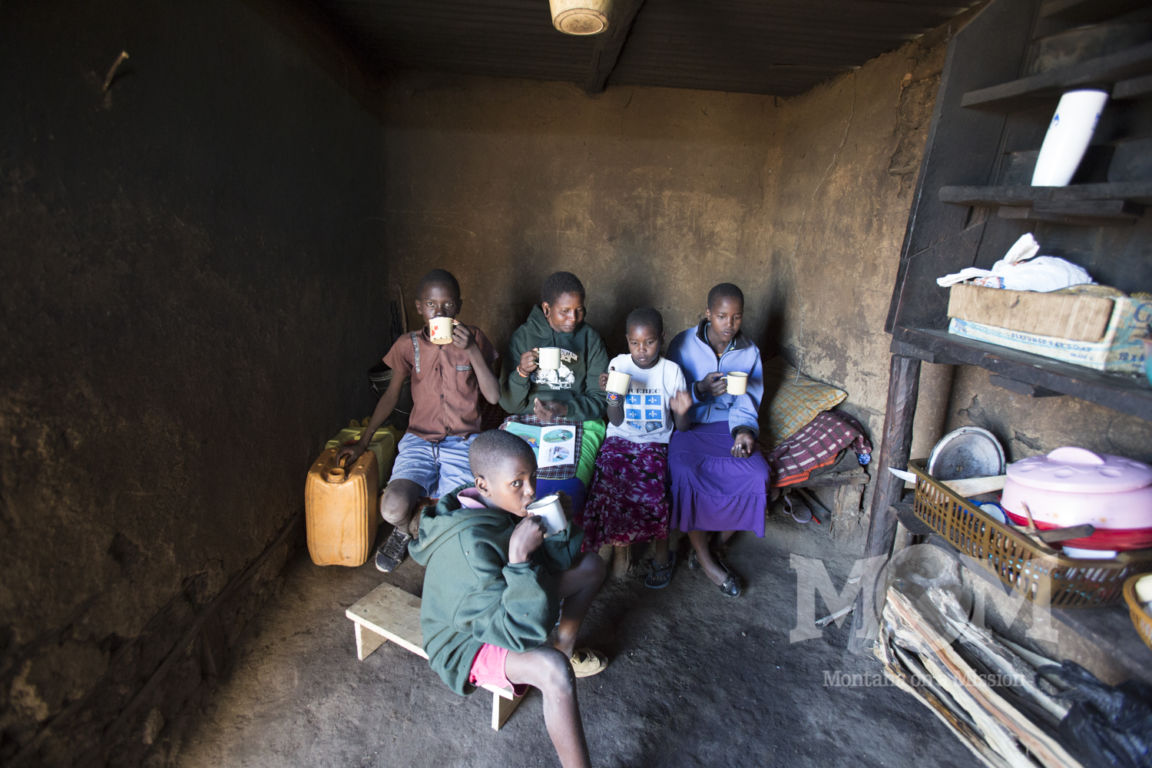 George, Kelvin, Noomali, Nasheepai and Miriam enjoy the breakfast of mixed tea in the mud kitchen.

When they are finished they leave their cups in the wash tub and the children open the gates of the livestock pens to take the animals to water and graze for the day. They scramble to catch the youngest lambs, kids and calves which must stay back. The walk to water is too far for them to travel and out in the bush they are a magnet for predators. 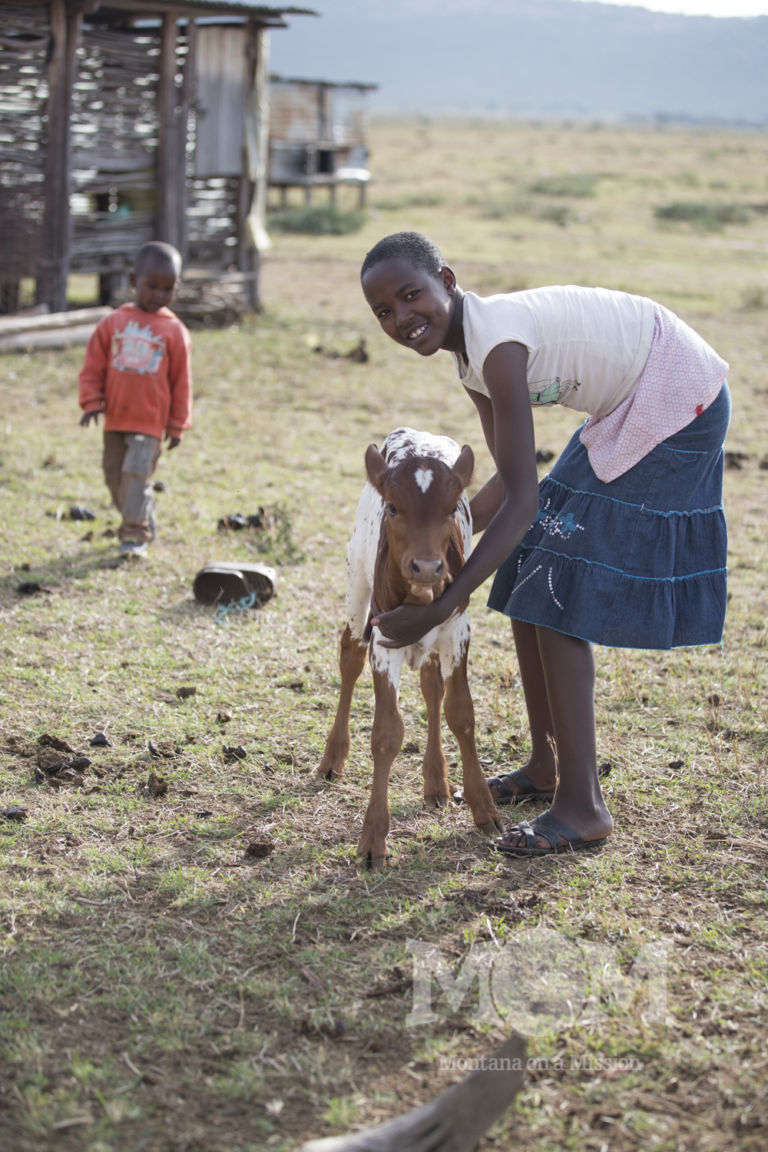 Miriam and Leonard catch a young calf that will stay back for the day. 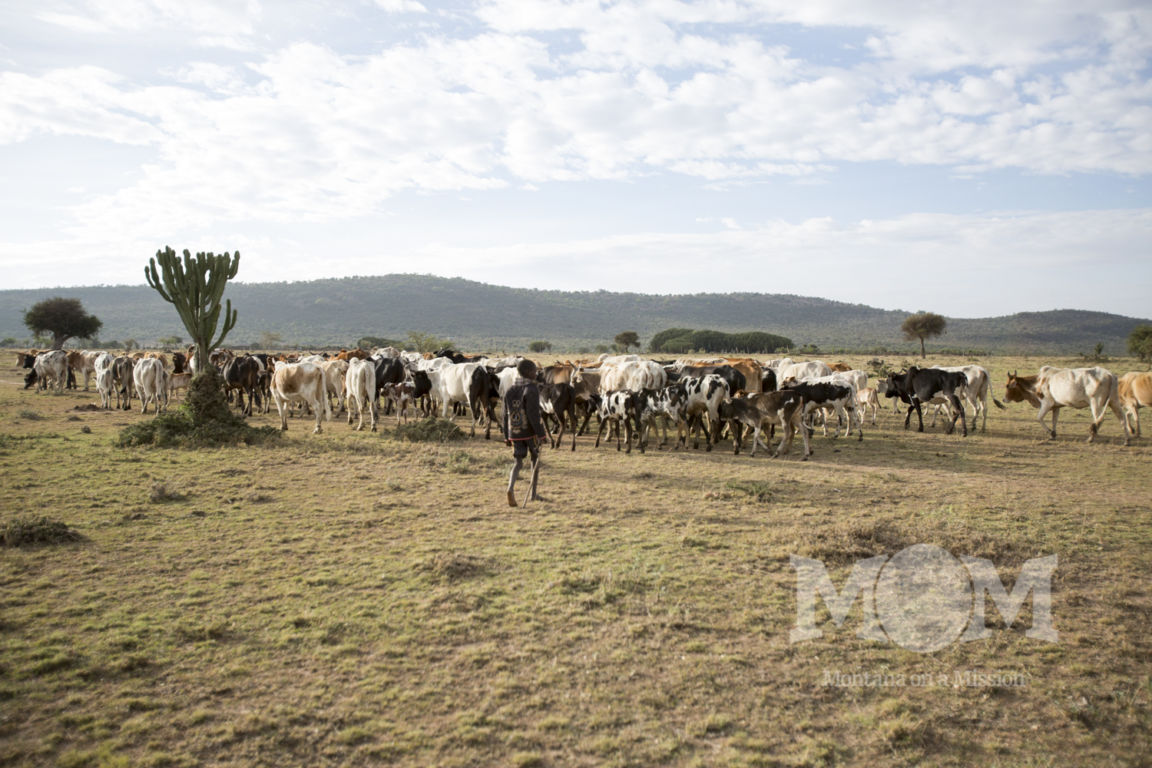 The cattle leave to graze in the bush for the day.

The young shepherds take their job very seriously and understand that each animal is an important part of the family’s livelihood. They take pride in their herd. Boys begin training with their older brothers and cousins when they are as young as three or four years old. 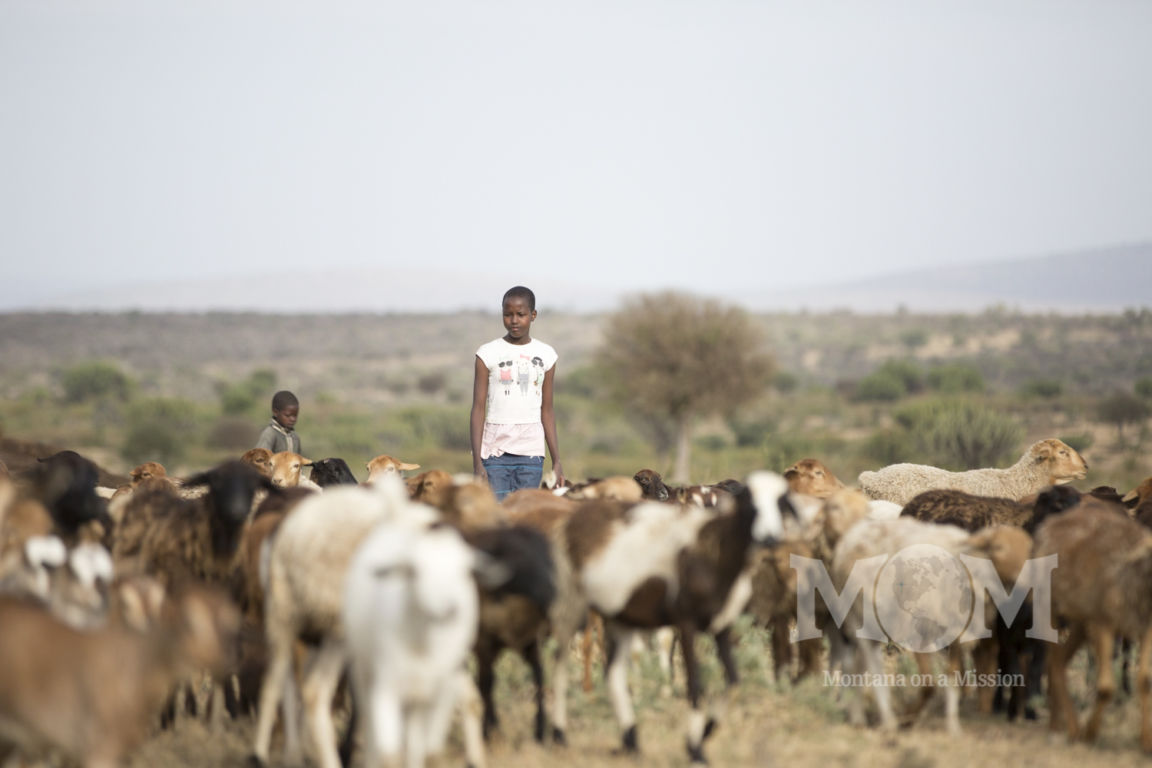 The children help to herd the animals in the direction of water. 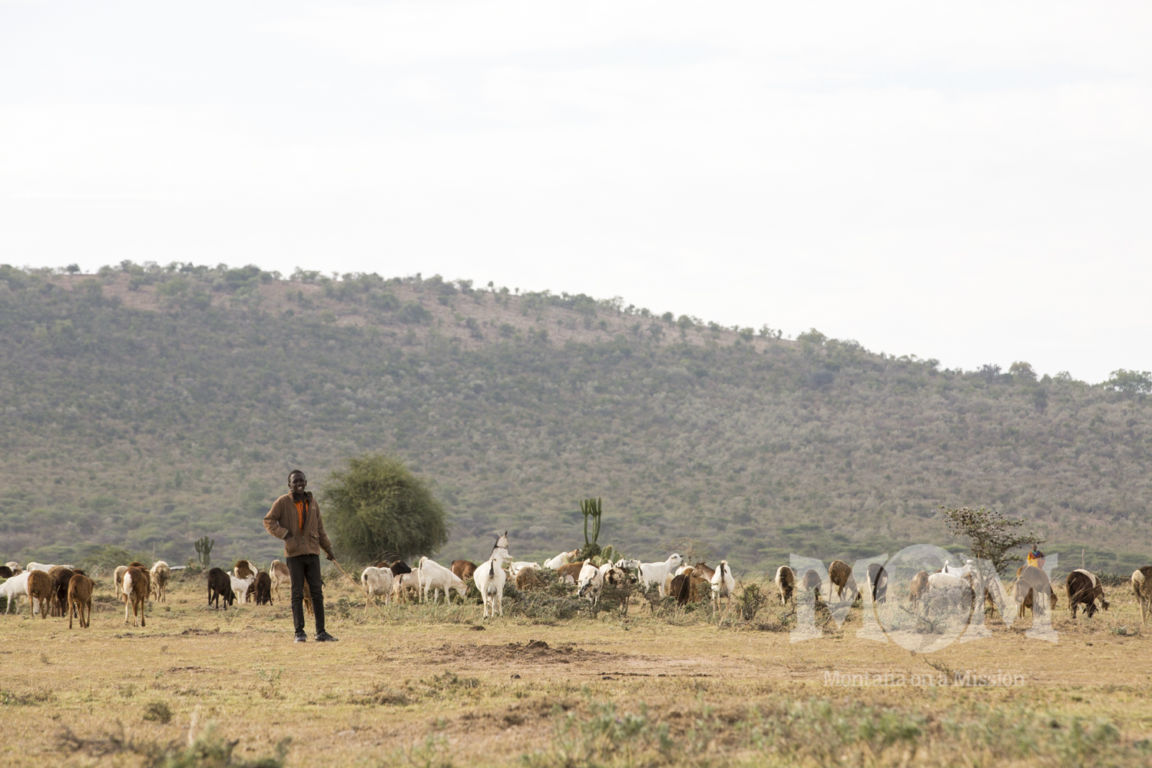 Kelvin shepherds his flock during a school break. 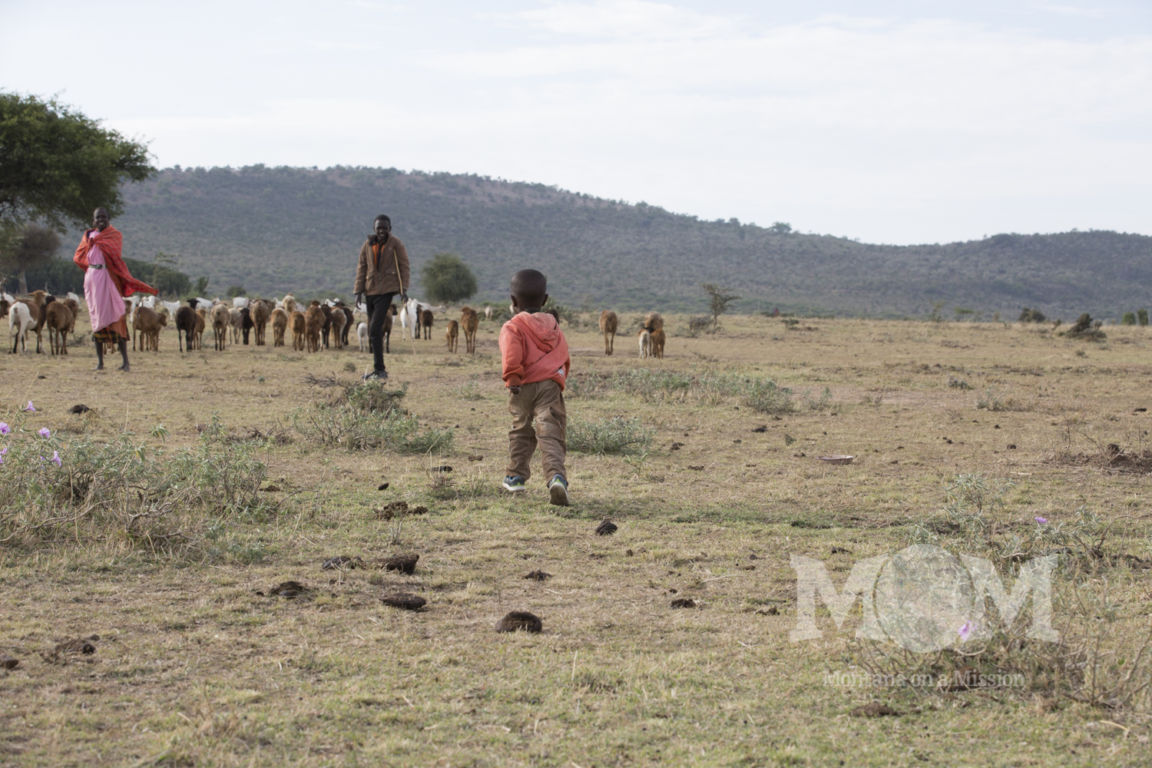 Leonard runs to catch up with his big brother. He wants to learn all he can before it is his turn to be in charge of the flock.

And so begins a typical morning in the life of a Maasai family. An early morning, taking care of the animals, a breakfast of mixed tea and off into the bush in search of water and grass. Check back soon for our next segment describing some of the daily work of the women.

A gift that keeps on giving