There is no shortage of need for clean water in southern Kenya. A Massai village named Papuyia in Narok County is no exception. The job of finding, collecting and hauling life sustaining water home falls to the women and children. The trek to fetch water varies from a few hundred meters to several kilometers.  If there are elephants or lions on the journey or at the source the task is aborted that day or until it is safe. Young girls often forsake their education to help their mothers fetch water, leading to a never-ending cycle of subsistence living. 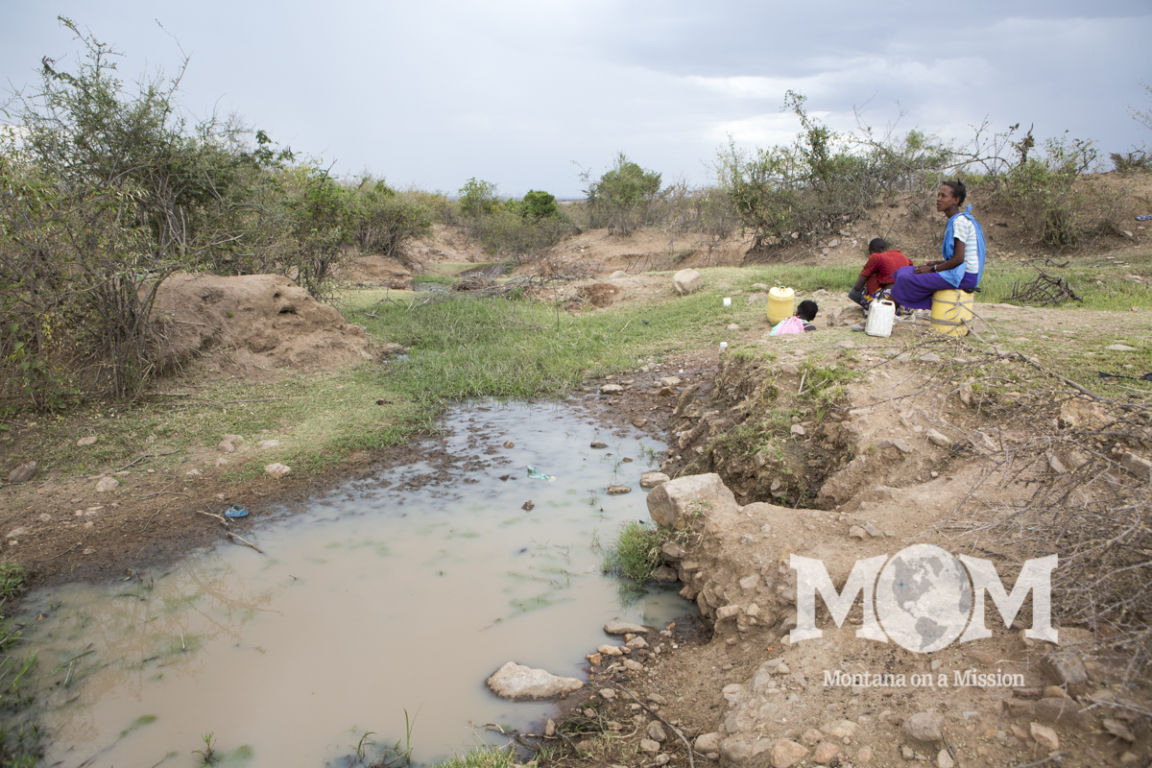 A group of women gather at an unprotected spring in the Papuyia area.

The sources of the water vary: sometimes a spring or a running river, sometimes a dry riverbed where they dig a hole down to the water. We watched as a woman dug in the sand of a dry riverbed, deeper than the day before, as the water had receded. The water she dipped out of the hole was murky and can contain water-borne bacteria that can cause illness or even death.  Our hearts sank to think that is the water for her family for the day. 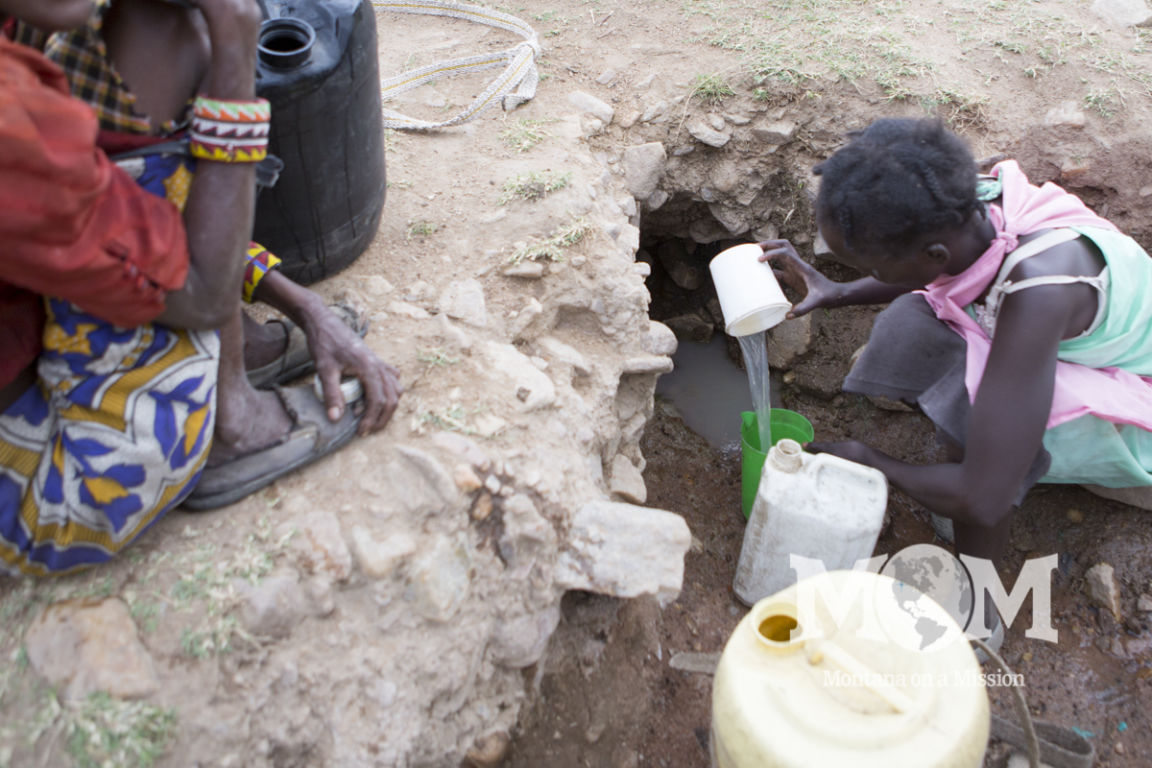 A woman fetches water at the spring

Lack of clean water also has a negative impact on personal hygiene. When there is not enough water to wash faces and bathe, the flies are incessant and spread disease throughout the families. We watched as flies crawled from the dried milk on a little boy’s face then onto, and into his nose and eyes. It was sickening to watch and heartbreaking to think of the impacts it may have on this little boy. The chance for children to reach the age of five is only fifty percent. Many of those deaths can be directly attributed to the lack of clean water. If the source is a collected spring or tap from a well there is clean, safe water. 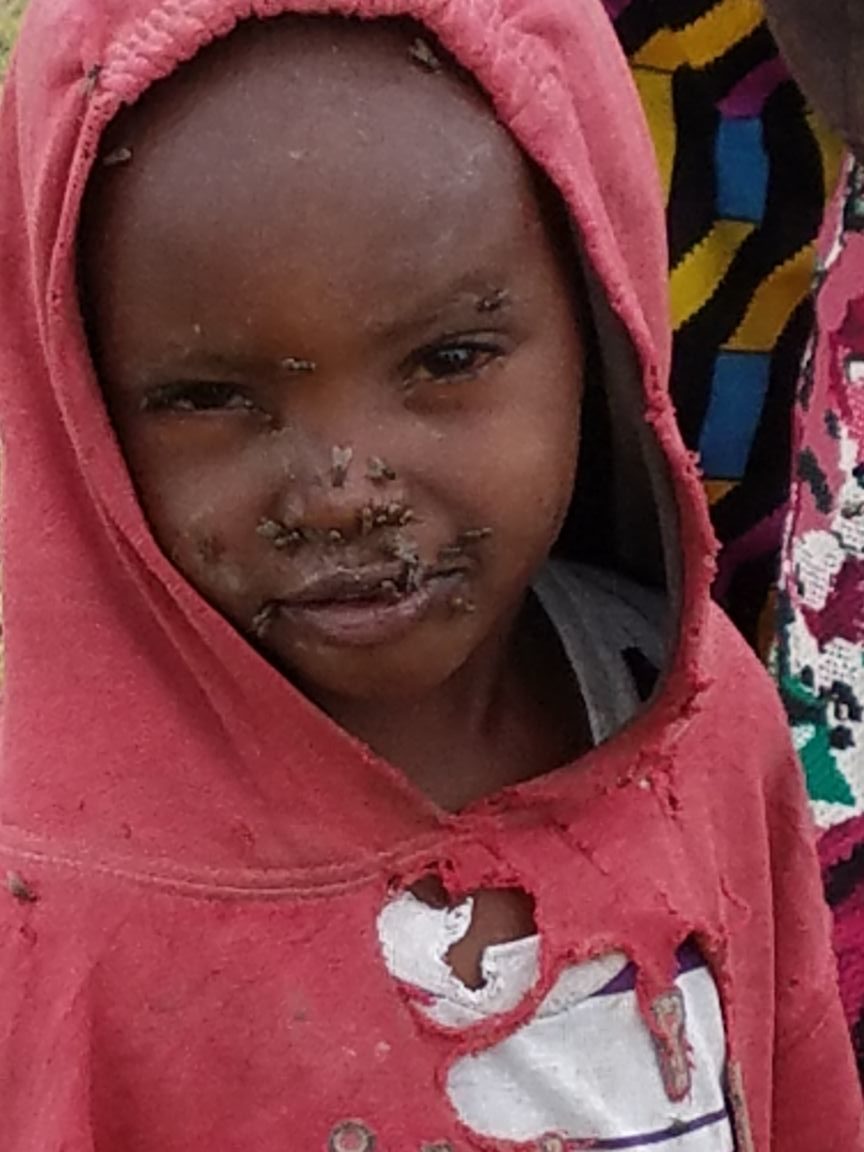 Young children are especially susceptible to health problems due to insects gathering on their faces.

Montana on a Mission (MOM) is committed to increasing the supply of clean, safe water for the people of Kenya. We have developed springs, drilled wells and installed pipelines which have increased the supply of clean water and decreased the distance of the daily water gathering treks.  While developing water in Kenya is not a new idea, water developments have met with mixed success. MOM has developed a method that has greatly increased the long-term success of our water development projects. It starts with building a healthy partnership with the community. MOM will identify the need, locate the source, and develop the spring or drill the well and install the pipeline. The community exhibits its commitment to the success of the project by securing ownership of the water source, establishing a water committee to manage and maintain the project and paying 10% of the initial cost. With these commitments from MOM and the community their partnership insures the long-term sustainability of the project. 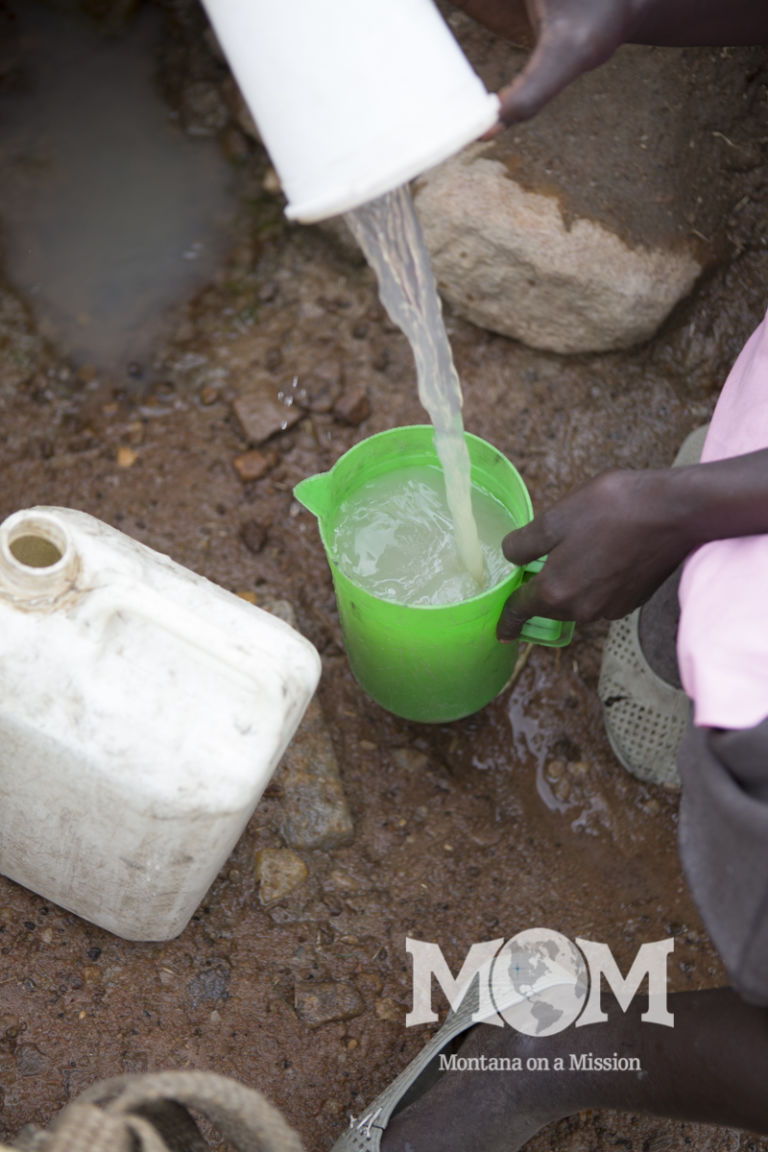 The water collected from unprotected sources is very often contaminated with deadly diseases such as cholera and typhoid.

The community of Papuyia is a wonderful example of this type of partnership. Just like MOM, the people of Papuyia have a deep faith in our Lord and view themselves as stewards of his creation. Papuyia is a community in dire need of clean water.  During a February visit, the men of Papuyia were anxious to show the amount of time and energy it took for their women to go to the dry riverbed where they dug for murky water to supply their families.  MOM has identified a well site with excellent potential for a successful flowing well. It is located close to a school of 50+ students and 800 people who would directly benefit from a borehole providing a clean water supply . The community has made all their necessary commitments.  The one missing component is funding. A completed borehole project costs and average of $40,000, including the drilling, solar pump and infrastructure, troughs for the livestock and wildlife, and a fetching ‘kiosk’ with two taps. 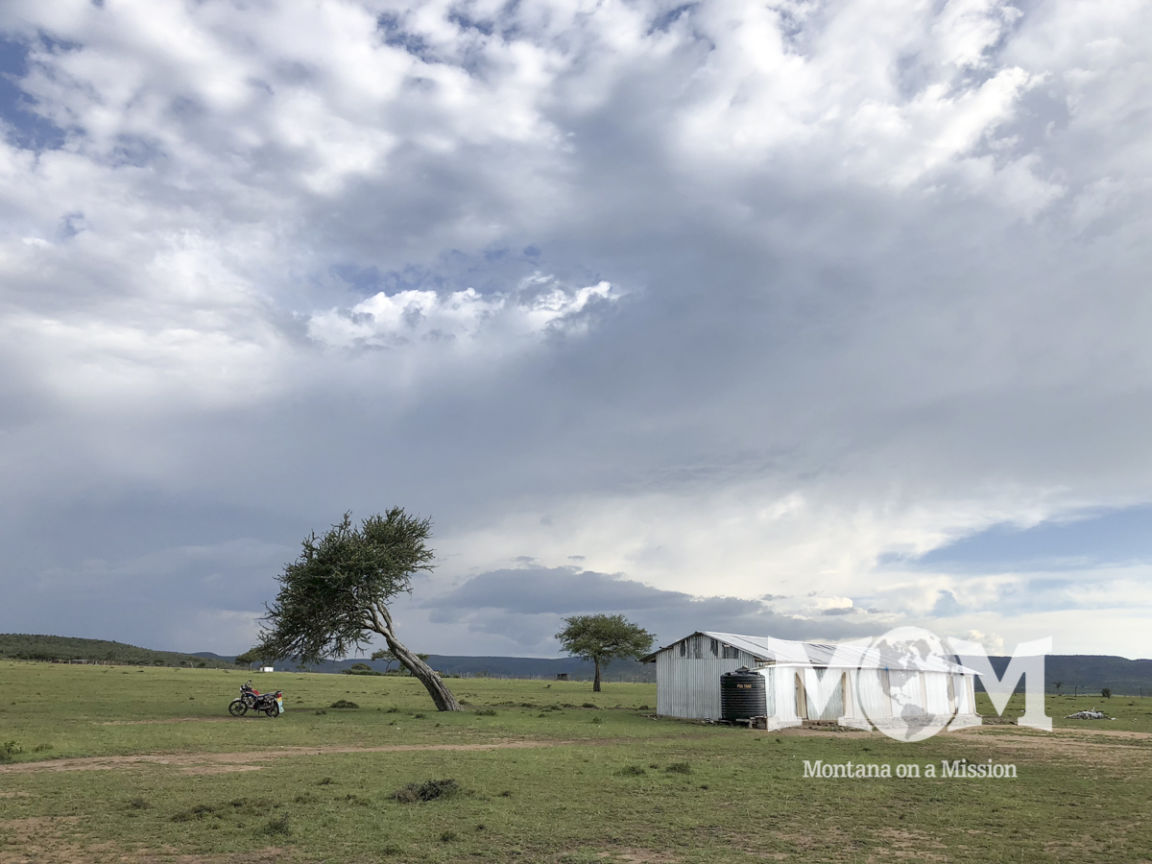 The new four classroom school at Papuyia is adjacent to the site of the planned borehole and will benefit greatly from having clean water on site.

At this time MOM has identified several more projects such as Papuyia and are actively seeking donors to make these life sustaining water developments a reality.

You can make a secure, tax-deductible donation by check or online at montanaonamission.org

Be sure to select the H2O For Life Africa Fund from the drop-down menu.