Ilturisho was our first deep borehole project after beginning our clean water work in Kenya with spring developments.  The borehole was drilled in March 2016. 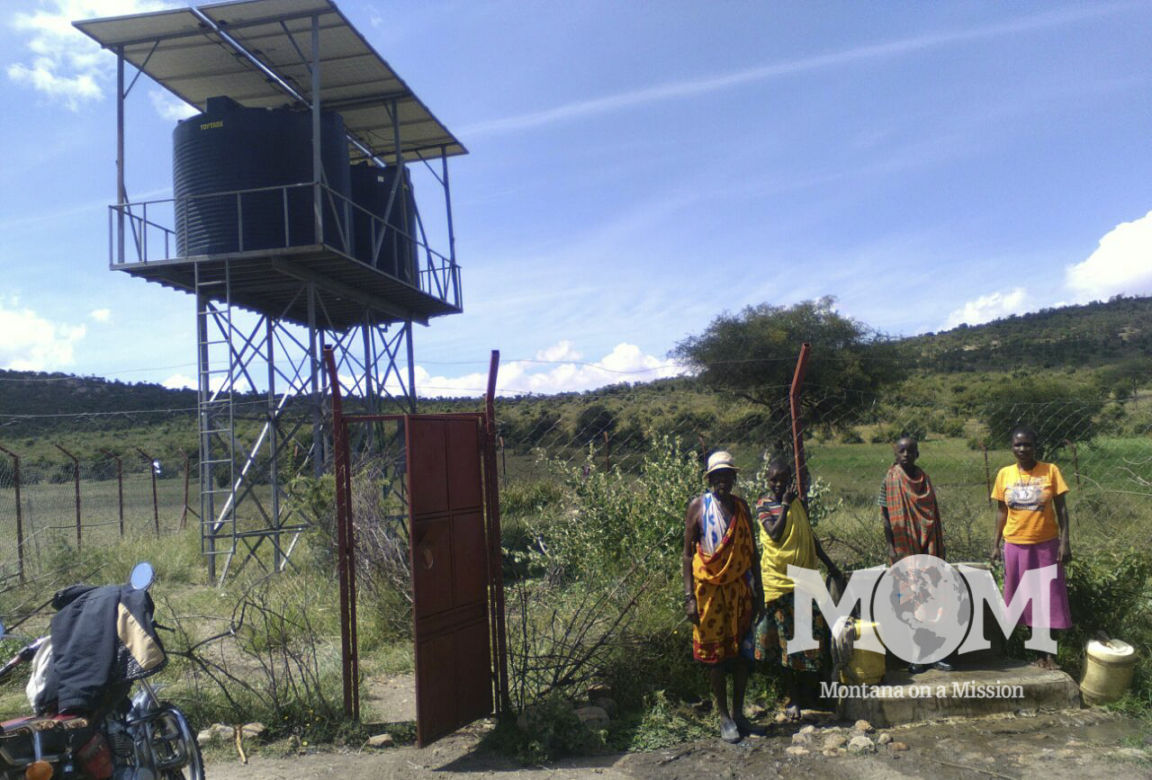 A recent photo at the Montana on a Mission Ilturisho borehole.

A year later a 2 km pipeline was added bringing water to the community primary school and adding two sets of livestock troughs and water fetching taps between the well and the school. A large water dispensing kiosk was added just beyond the school along the main road. It created quite a buzz and even the Governor came to “officially” open the kiosk. 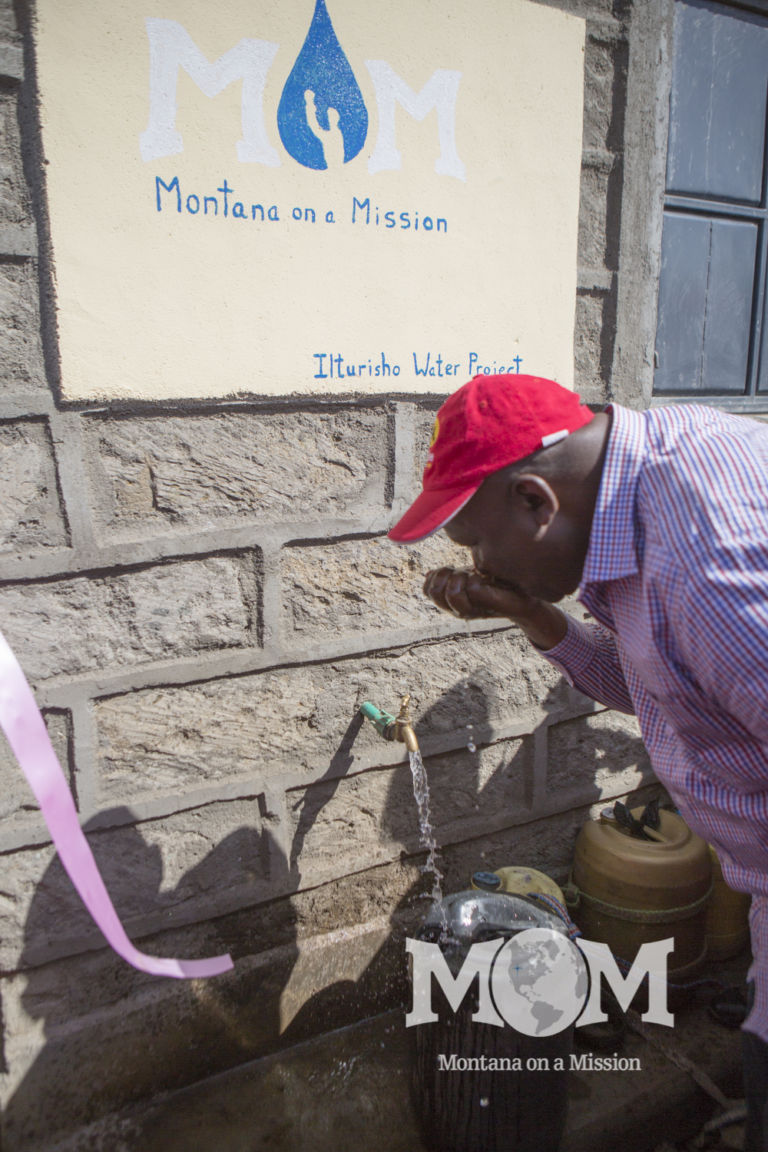 At the time of our first survey at Iltursiho in October 2015 it was estimated that a borehole in the area would serve 100 families.  Due to the growth at the school after the pipeline was installed and the traffic because of the accessibility of water at the kiosk the borehole now serves an average of more than 2500 people each day!

We visited the Ilturisho school this past spring and were able to get some video of the students there. They took me to the reservoir they used to walk to to get water for the school.  This water was used for drinking, cleaning and cooking! The next part of the video shows the students using the clean water from the pipeline. I’m sure you can appreciate the difference.  The video speaks for itself. Not only does the pipeline allow the students to stay in the classroom during the school day, rather than walking the mile to fetch water at the reservoir, it also ensures that their food and drinking water are safe from contamination and allows for much better hygiene and health. 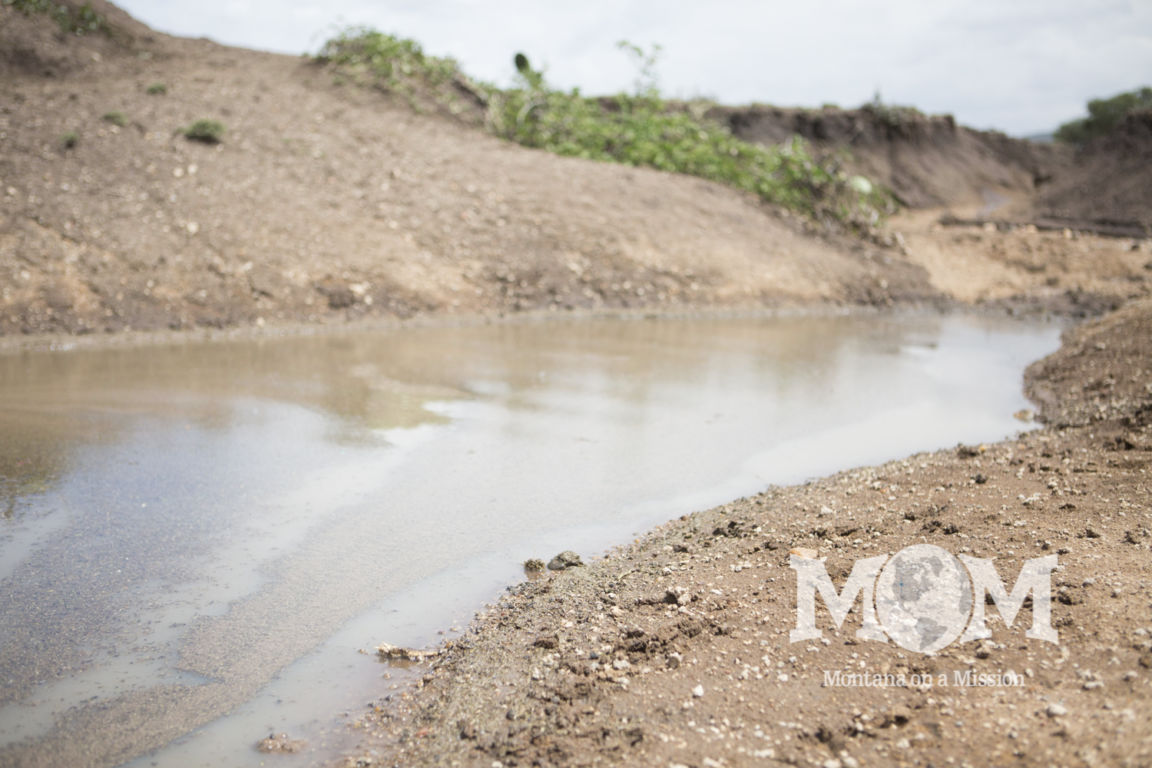 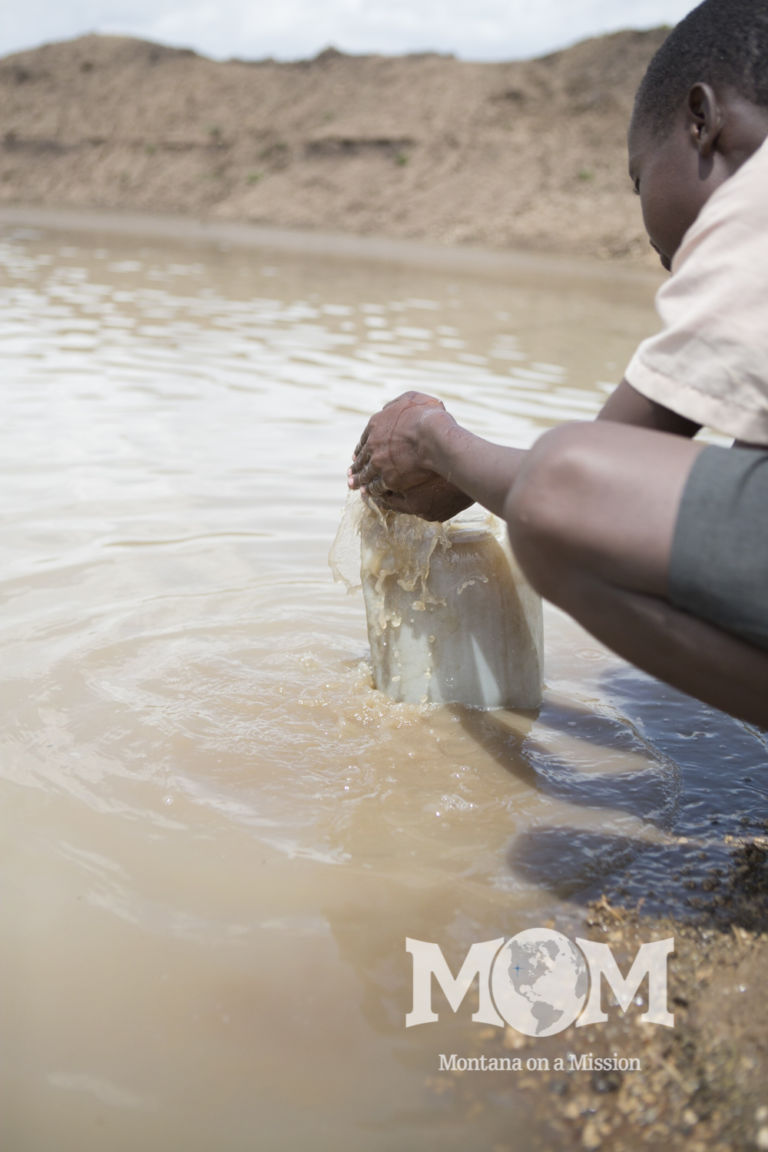 A student fills a jerry can from the reservoir. This water is used for drinking, cooking and cleaning. 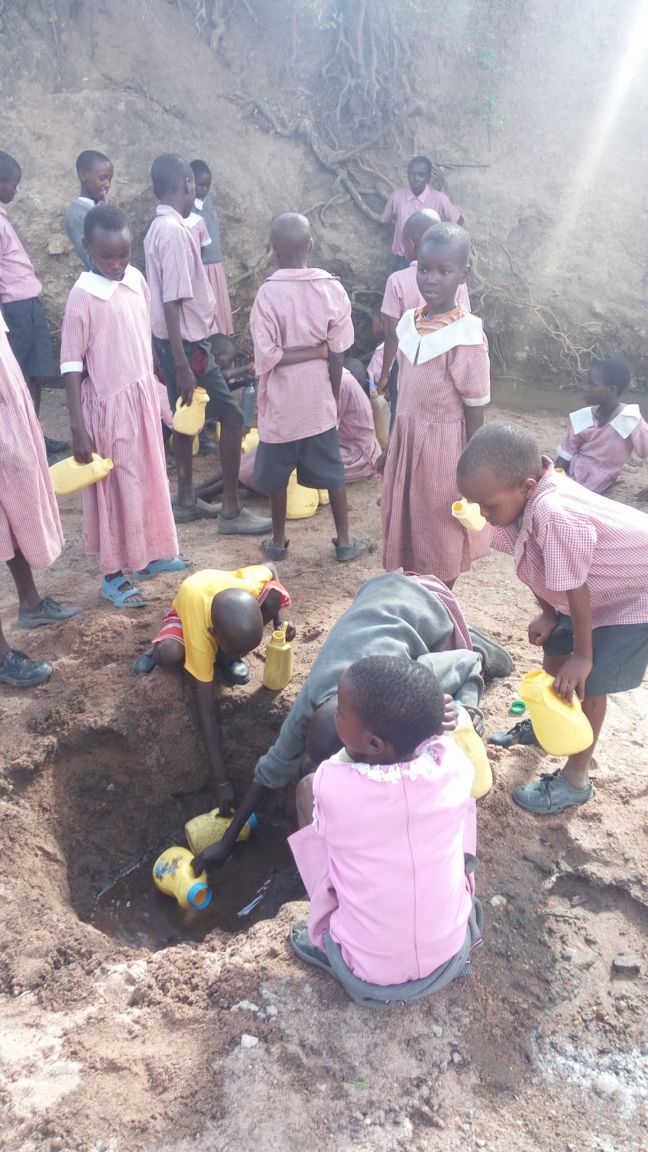 Students fills a jerry can from a sand scrape near the river when there is no water in the reservoir. 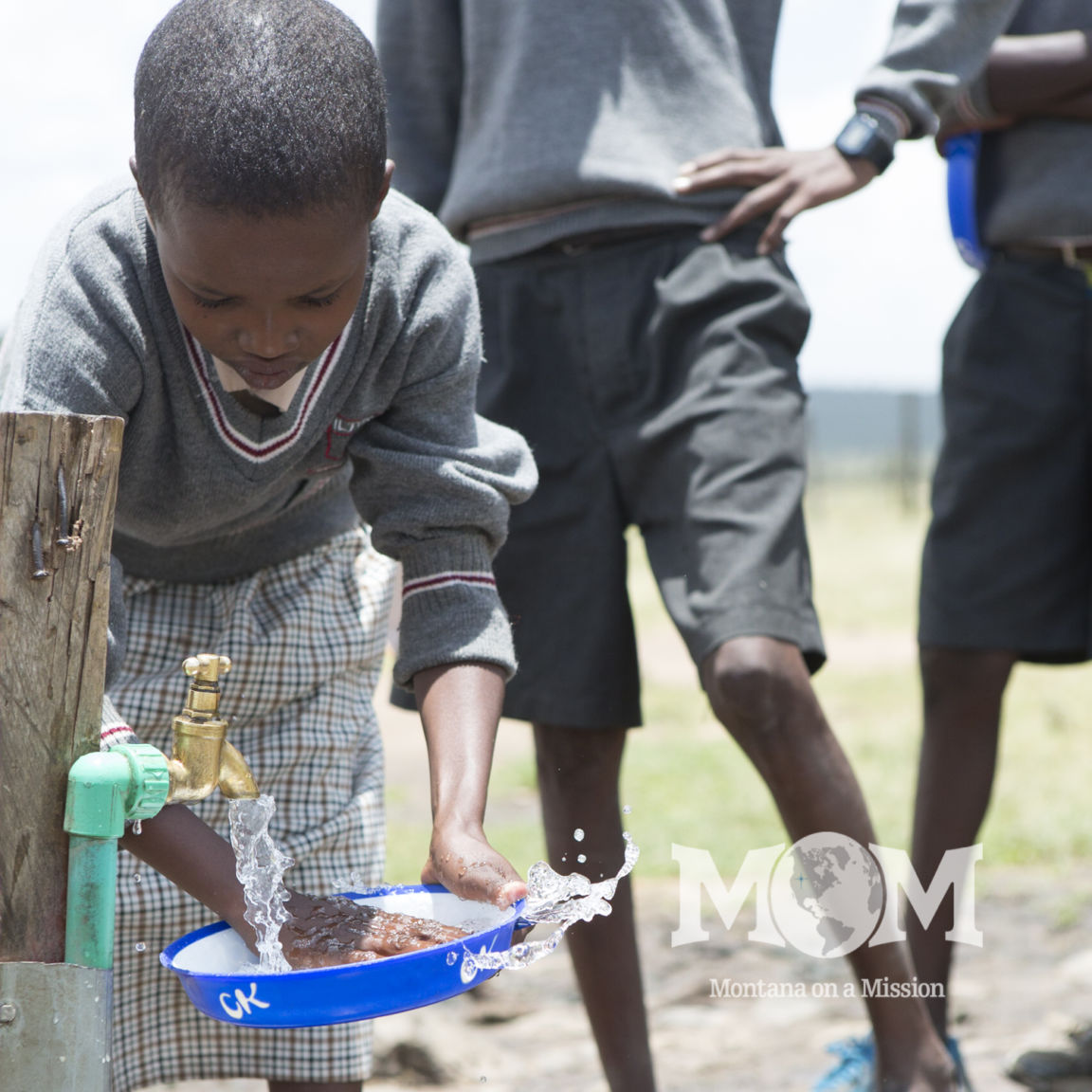 Ilturisho students line up to use the clan water to wash their plates after lunch. The pipeline has made it possible for the school to implement a lunch program as well. 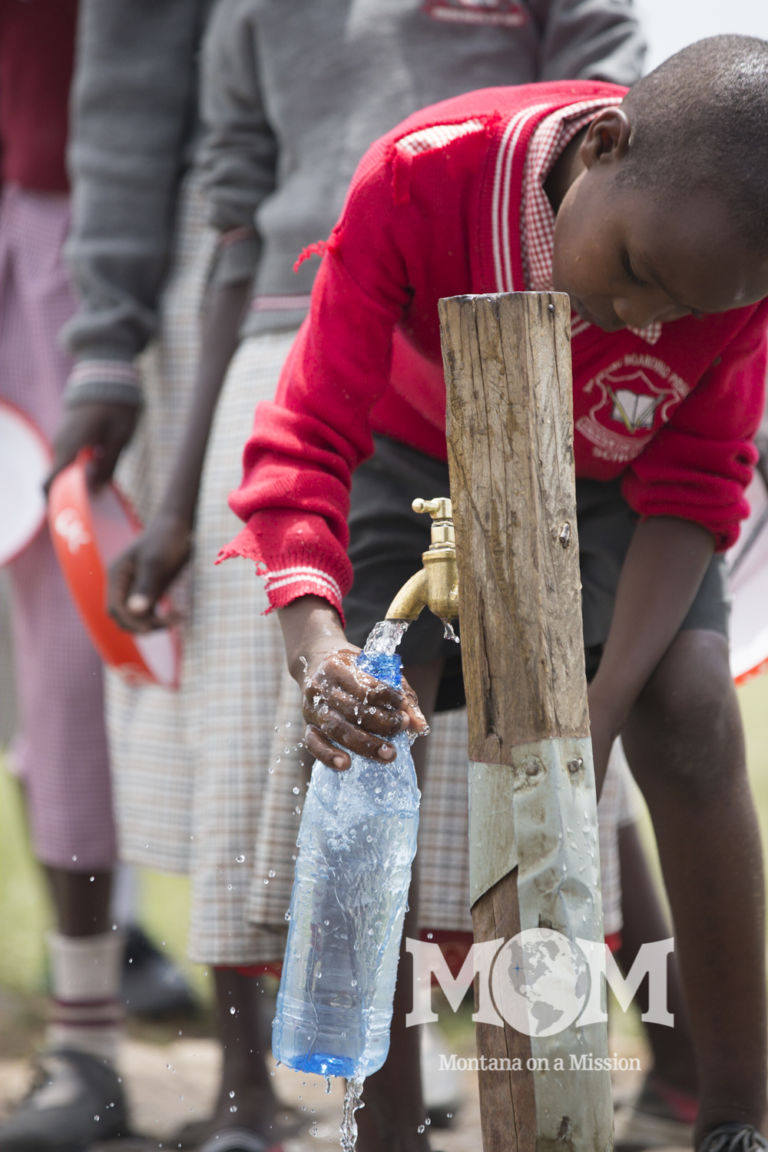 The students appreciate having clean water for drinking right on school grounds. The principal shared that there has been a noted increase in enrollment and decline in school absences.

Our goal for Montana on a Mission’s H2O For Life Kenya projects is to partner with the locals to improve their quality of life and ultimately to nourish their relationship with Jesus.

Providing families with the opportunity to have clean, safe water changes lives! Would you consider being a part of this amazing gift? A finished borehole project in rural Kenya costs an average of $40,000.  This includes the drilling, and purchase and installation of a solar pump system and holding tanks. Each of our boreholes serve from 1000 – 4000 people with clean water.

You can make a secure, tax-deductible donation by check or online at montanaonamission.org

Be sure to select the H2O For Life Africa Fund from the drop-down menu.

So Very Thankful
Scroll to top